25 to Life: This Date Lacks Toast 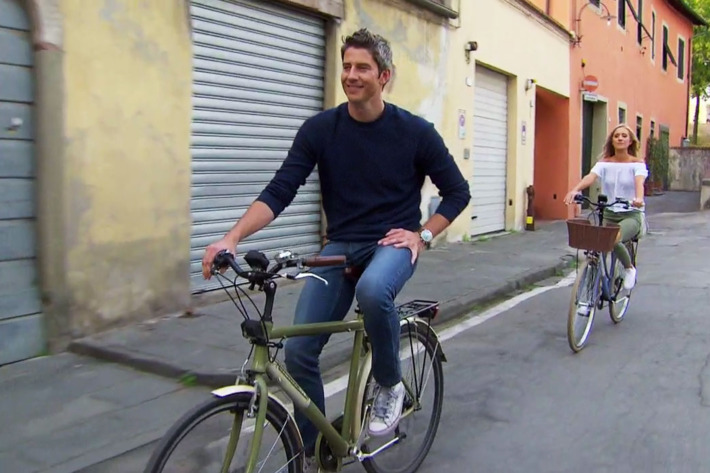 Now that The Bachelor has decided to fly through this last episode so will we! I find it terribly interesting that Arie decided to have a 1:1 date with pretty much every woman that was left on the show. I wonder… has he been dragging his feet and then finally got to the point where he needed to make a decision. This isn’t happy fun hour with a bunch of random women… this is TUSCANY!

The last time Arie spent this kind of quality time with Old Becca was the first one on one date. Remember, he bought her some shoes and took her on a Pretty Woman date. It is one of those dates that upon first glance is really romantic, but then you realize its dumb because all you’re doing is walking around. BORING. They make out a bunch and Arie realizes that Old Becca is pretty cool and she will keep her around for hometowns.

Jacqueline Has a Meltdown (and for a good reason)

Since we met Jaqueline she seemed like the most sane person on the show. She had great hair and come to find out she was a PhD candidate. She had her first 1:1 date with Arie last week and he was smitten with her. He seems to do this thing where he gets really into smart girls and tells them that he would struggle with keeping their relationship interesting. Remember how Arie said early on how boring he was? Jacqueline started to spiral about where they would live, how she would stay in school, and whether she was actually in love with Arie. Sometimes people get swept up in the magic of the show and for an intellectual, its hard to reason with your feelings. She let herself go home and will probably be more successful than about 70% of the people who watch this show.

Arie ALSO went on a date with Lauren B. last week in Paris. This was the date where she barely spoke and as a result, Arie read those emotions as any man would… “If she seems to act like she hates me, that means I love her.” Cool. She spoke a little bit more this week and was emotive more than usual. This date was also a nothing date, but was actually the perfect day in Italy. Who doesn’t want to ride bikes followed by a meal of pizza and gelato? ALLORA. At the evening portion of the date, Lauren B. (after only 2 dates mind you) says she is falling for Arie. He is so excited, he has to excuse himself from the dinner table. PUH-LEASE. He’s so glad that she likes him back and he gives her the rose. Yea. She looks thrilled.

Seinne is a queen. She is perfect. We do not deserve her and neither does Arie. The two spent the day hinting for truffles with the most adorable dogs ever. How could this not be an amazing date. I would be more invested in the dogs than Arie. Not much happened here because we knew that Arie was not going to give Seinne a hometown date. This felt like a pity date. She goes home and her chances to become the next Bachelorette go up.

The ladies that remain — Kendall, Tia, and Baby Bekah — go to a park / garden thing with Arie to just… talk. What a waste! While Arie was spending his last 1:1 time with Kendall, Tia dragged Baby Bekah to her face about how she was not ready to get married and that she was too young to even be in the running. I felt like this might have been a retaliation for how annoying Bekah might have become at this point in the game and Tia was just ready to go home and get Arie to her family. Bekah had a meltdown and cried her crocodile tears into Arie’s shirt. Kendall got the rose during the daytime portion and we were forced to have Bekah and Tia stare at each other while Arie made the obvious decision to choose Tia over Baby Bekah. It’s just as well. There is no way that she would have made it to the end.

Hometowns are next week and it sounds like we will have a lot of protective father’s on our hands. Fun.

25 to Life: Hannah Be Lukewarm

Be The Whole Cake: Find Your Ingredients (Or Lack Of)