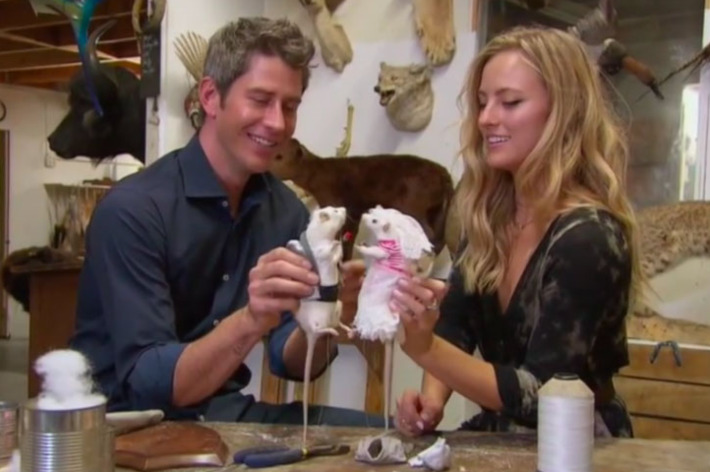 It’s time for the Hometown Dates on The Bachelor this week. Let’s see which family hates Arie the most…

We meet Kendall’s family and she has a twin sister named Kylie, who just had a baby with Travis Scott. The family is loosely supportive of Arie, but they are more concerned with the fact that Kendall isn’t actually ready to get married. She is saying she is in love with him, but the prospect of marriage is not on the table for her right now. I don’t think she realizes she is on a show where the whole point is to get married. She tells Arie she is “falling for him,” and we all move on to the next trip.

This time in Arkansas (unlike the trip Nick had with Raven in her hometown) was a cute race car time where few beers were had and Tia gave Arie the low down on who she would meet. Most of her family had Googled Arie and found out that he had a bit of a reputation. He quickly dismissed those concerns and Tia’s family was more than ok with the two of them getting together since all of the other guys Tia has ever dated are goons.

The planned date was actually really fun because Arie didn’t plan it. We go apple picking with Becca and she goes into detail about how excited and comfortable she is with Arie in her home town. Becca’s dad passed away when she was 19 and as a result she has a wide network of Uncles and other family protecting her. Uncle Gary in particular was a tough nut to crack. Again, Arie being a gentleman and also a real estate agent made him a reasonable candidate to marry her.

A boring date for a boring couple. One of the producers suggested that Lauren B. take Arie horseback riding, but they just ended up making out instead because neither of them had anything to talk about. Back at The B House, Lauren’s family was tough. She had just been engaged about a year ago and now she wants to go on The Bachelor and marry a failed race car driver? No. Turns out, the most challenging person for Arie to break was actually Lauren’s mom. She could not be bothered with the process and was definitely NOT impressed by anything that was presented to her. She’s my kind of lady.

In a surprise upset after pulling Kendall aside to get some confirmation from her to see if she is actually ready to get married, we lose Tia this week. Arie barely shed a tear for her. He cried more when he let Bekah go and she was 12. There is a small shot that Tia could be in the running to become The Bachelorette, but I think they might have a few other candidates (i.e.: Seinne) to consider first.

Next week, we get two episodes – The Women Tell All and the Fantasy Suite dates in Peru.

The Bachelor Finale Predictions! Who Will Ben Choose?