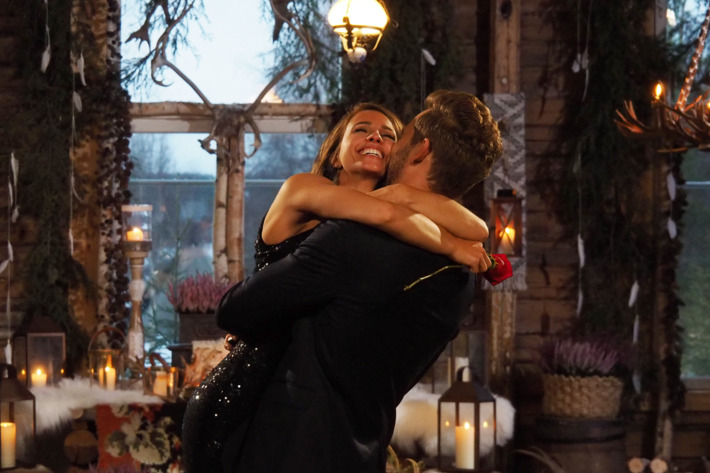 When we get to the finale of The Bachelor, usually there are very strong feelings associated with the end of each season. Loss over a full 10+ weeks of something you have invested so much time in and anger over how dumb the lead can be when he picks the wrong person. But for the first time in a long time, Nick Viall got it right. Seriously. He picked a grown up. Thought to some watching the show, Vanessa seemed to be “difficult” and “confrontational” when in reality she just hadn’t seen the show and literally had no idea how the game worked. She also was pretty clear about her expectations for a marriage. Not just a relationship. If you were her, wouldn’t you be frustrated if you started dating a guy you really liked and he liked you back, you said, “I love you,” and he gave you a non-committal answer back even though he clearly displayed the symptoms of someone who was in love. I would tear my hair out.

We open the episode with the two finalists meeting Nick’s massive family. For someone who doesn’t like a lot of family time, he seems to talk about them a lot. Now let us all remember that Raven actually met Nick’s family a few weeks ago when they went to his hometown for her first 1:1 date. She seemed comfortable with them and they took to her really well. What is there not to love about Raven? Her charming accent and her IDGAF because I might shank you with a stiletto attitude. Bella is sold and has been for a long time on her. Unrelated, does anyone know how much it costs to go to Finland? Did Bella going back to school on Monday with some excuse as to why she went to Finland for a week?

Vanessa had more of an emotionally trying time with Nick’s family. I don’t know why, but it was weird that his family was so much more emotional with Vanessa than they were with Raven. Vanessa spent most of her meet and greet with the Vialls asking questions about her relationship with Nick trying to get answers from anyone who would give them to her. As Nick mentioned on After the Final Rose, he told his parents who he picked, but did he tell them before they met the final two women in Finland? It seems like they knew something we didn’t know at the time. Also, the show hit this whole what if one of the women doesn’t say yes business a little too hard. Of course the woman he asks will say yes. Stop doing this ABC.

For their final 1:1 dates you could tell there was a stark difference between the conversations Nick was having with Vanessa over the conversations he was having with Raven. On the one hand, Raven’s last date was all kisses and nods and descriptions of the days events. ALSO PUPPIES! Vanessa’s date was a little bit more intense and she had Santa to contend with. She was looking for that final profession of love that would send her over the edge. She got so caught up on the answers she was pressing Nick for he finally said (in a moment that surprised me), “You’re asking me to tell you my decision and I can’t do that.” Now that shut her up didn’t it. I just really wish she had watched the show before coming on the program. She would have mellowed out completely if she had done a bit more studying.

At the final rose ceremony, Raven looks like she is going to prom and Vanessa looks like a woman who is ready to do this thing. Guess who he picked?

On After the Final Rose, Raven shined bright like a diamond (I’ve been listening to a lot of Rihanna lately) and couldn’t care less about her break-up with Nick. She wore a killer on trend green slip dress, she’s going to BIP, and her store in Hoxie probably has more business than it has in years. What more could she want? Get it girl.

Meanwhile, Vanessa and Nick lamented about the challenges of their relationships a little more than I liked. Why can’t we all just get along? And why won’t the producers let them have the love they wish to have? Everything doesn’t have to be hard to be meaningful Bachelor people. I have high hopes for them only because Nick won’t be able to live this break-up down. Did anyone catch Chris Harrison’s immigration joke when Vanessa talked about moving to the US? Not as easy as it used to be, indeed!

Of course a finale couldn’t happen without seeing our new Bachelorette Rachel Lindsay. I adore her. Can I talk about that jumpsuit?! KILLER. EVERYTHING. YAS QUEEN. Chris Harrison teased some historic moment happening on the finale and like everyone else in America I said, “Surprise me.” Well we met a few of Rachel’s suitors tonight and I never thought I would say this, but there were more black guys on this episode than there has been in the entire Bachelor franchise (that’s not true, but I said it fore comedic effect). We meet DeMario, Blake, Dean, and Eric. My money is on Eric so far. I mean… he just got it.

See you in May fam!

If You Ain’t No Punk, Holler ‘We Want Prenup’!