25 to Life: Hannah Be Meeting Parents 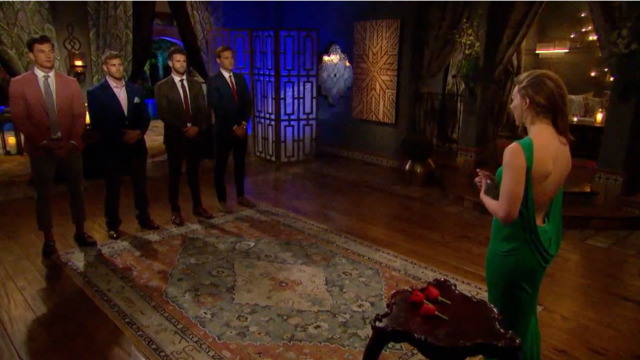 Happy Hometown Week on The Bachelorette! Let’s get into it shall we?!

There is nothing that could touch Peter on this date. You could tell that when he saw Hannah he was floating on air. Untouchable you could say! They spent a bit of time flying over LA and then went to his house. Apparently, Peter (the whitest person I’ve ever seen on TV) is Cuban (??) and the family also shouts a German prayer before they eat. There seems to be a lot of confusion about the family tree of The Webbers. Peter cries a bunch, then his mom cries a bunch, then his dad cries a bunch, and his little brother Jack is stone cold. Peter talks about his journey with Hannah and he’s all but said he wants to marry her right now. Even with as confident he’s feeling about telling Hannah he loves her, he’s still too chicken to say it.

Tyler and Hannah head out on the boat in Jupiter and he looks fantastic. Tyler has the body of a Greek god and the speech pattern of an animated version of Rocky Balboa. He shows Hannah his old home on the boat ride and they do some dancing with a local band. They head to Tyler’s home and this is a big step for him because he hasn’t been home since his dad has been sick. Their reunion is super emotional and even more poignant with Hannah being there. Tyler has a really sweet, beautiful family. Hannah would be lucky to have them. She wont pick him and we all know it.

So this guy has duped the entire town of Gainesville, Georgia to rally behind him with their pitchforks and crosses. Luke takes Hannah to “Sunday School” where he (again) tells the tale of partying and drinking and chasing sex… all things you can still do and love Jesus, but whatever. Hannah is so warmed to be around all of these people who love Luke so much! It’s been weeks since anyone has said anything nice about him so she was surprised by so many phony reactions from Luke’s friends. Hannah goes to Luke’s house to meet his family including Luke’s beautiful mother and his brother named Mike who looks exactly like him except tall. They talk a lot about Jesus and Hannah is pleased as pie to be falling for him.

We head to Nashville and Jed does what he does best… takes Hannah to the studio to play more of his music. This is really his job. Truly. He has leaned so had into the music thing it’s now super clear that he really only came on the show for this. Later, they head to Jed’s family’s house and they could care less that Hannah is here. Clearly they know something we don’t know, that Jed isn’t into Hannah and that he proactively told his family not to even give Hannah an inch when he comes to visit. His family is super focused on his music career and wants to make sure that Hannah is also focused on his career. She didn’t get a great vibe from his family, but she likes him the most so it doesn’t technically matter.

Instead of kicking off one guy this week (she says she didn’t get enough of a chance to get to know them), Hannah send no one home and she goes to Crete for her Fantasy Suite week. Will she bang everyone but Luke? We hope so!