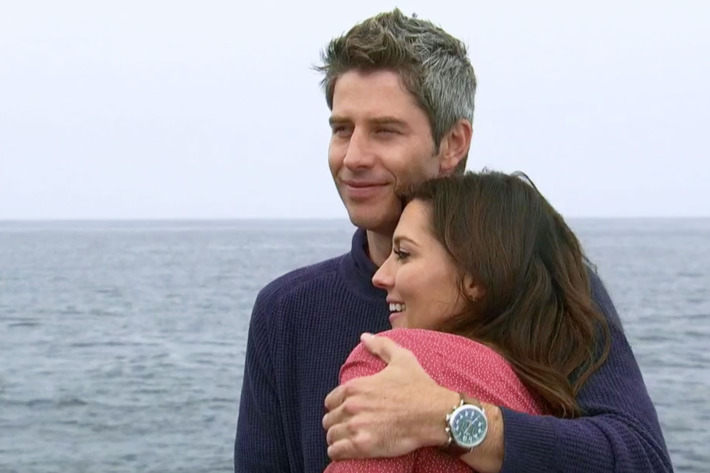 We are in the home stretch which means this national nightmare will soon be over. Because ABC needs to fill their content block to battle the Olympics so we got two episodes this week:

Not too much exciting happened on this episode, but a few revelations were made. The Bachelorette try-out hot seat was occupied by Tia, Seinne, and Baby Bekah. Most of the focus on what’s happening next lied with Seinne (Yale Grad and all around perfect lady) and Tia (the WT princess with a heart of gold). Baby Bekah is pretty much a lock for BIP which is fine with me. I really adore her and think she is miles ahead of all of the women who have ever been on this show. Of course Arie came out and was bashed by the women for being himself. Then Caroline said something that shook me up:

“You’re here trying to find a wife. I know what you did. I don’t know how you could do that and I just really don’t understand, but I really hope you found what you’re looking for.”

Girl, what!? Arie then says… “That will play out.” And then we go to bloopers. Chris Harrison has been doing this show for 20+ years and has yet to convince me to take anything he says seriously. One line from Caroline completely took me down. What could she be talking about? What did Arie do!? What about Seinne?

Let’s get to the Fantasy Suite dates in Peru.

Every taxidermist’s favorite girl goes on a Mad Max sand dune adventure with Arie. She still can barely get to the point where she is open to falling in love in general let alone falling in love with Arie. As we know, he kept Kendall because he wanted to either give her more time, or he was so snobby that he didn’t wan’t to lead Tia on and make her think he could get over being served pigs in a blanket at her parent’s house. Kendall said a lot of things on her date with Arie and tried to convince herself that she was falling in love with him. It was too little too late.

This is the most we have heard Lauren B. speak in the 10 weeks of this show. She talked about how she was so scared about being in a relationship with Arie and how at any moment her relationship with him could change. She was trying to open up all day and told Arie the following: 1) I almost left  and 2) I want to know I am the only person you want to be with or I’m done. Ok… I’ve had it about up to here with her “demands” that aren’t backed up by any sort of reciprocation on her part. Arie, so overcome with the possibility of losing Lauren decides to tell her he loves her. TWICE. Now remember, Lauren B. is 25 years old and has been engaged twice.

Becca has been the most consistent player in this game from the jump. In her relationship with Arie, they have no problems. This scares him. Why so often do people think that problems or conflict in a relationship equals passion? A “will they or won’t they” moment that fires all of the fear in a relationship actually working out. The basis of Arie’s relationship with Becca is a direct result of the conflict that he constantly feels with Lauren B. She is the safe choice. She even asks him, “Do you have anything you want to talk about or that you aren’t sure of?” He immediately says no. This man thrives on fear. It is what is keeping him so attached to Lauren B and drawn to Becca at the same time. He knows what he needs (the stability of Becca) but can’t help what he wants (the drama of Lauren B).  He dropped the “I love you” on Becca as well ahead of the Fantasy Suite just in time for the finale.

After what would be called a successful overnight date, some hottie with a cute butt named Ross shows up. Turns out he is Becca’s ex-boyfriend who she dated for 7 years before coming on the show. He said he wants her back and you can smell the producer plant from a mile away. Arie was annoyed and so was Becca, but it didn’t seem to change the outcome of this episode.

Next week, the finale and maybe an answer to Caroline’s cryptic statement.

25 to Life: Some Pretty Bayd Football