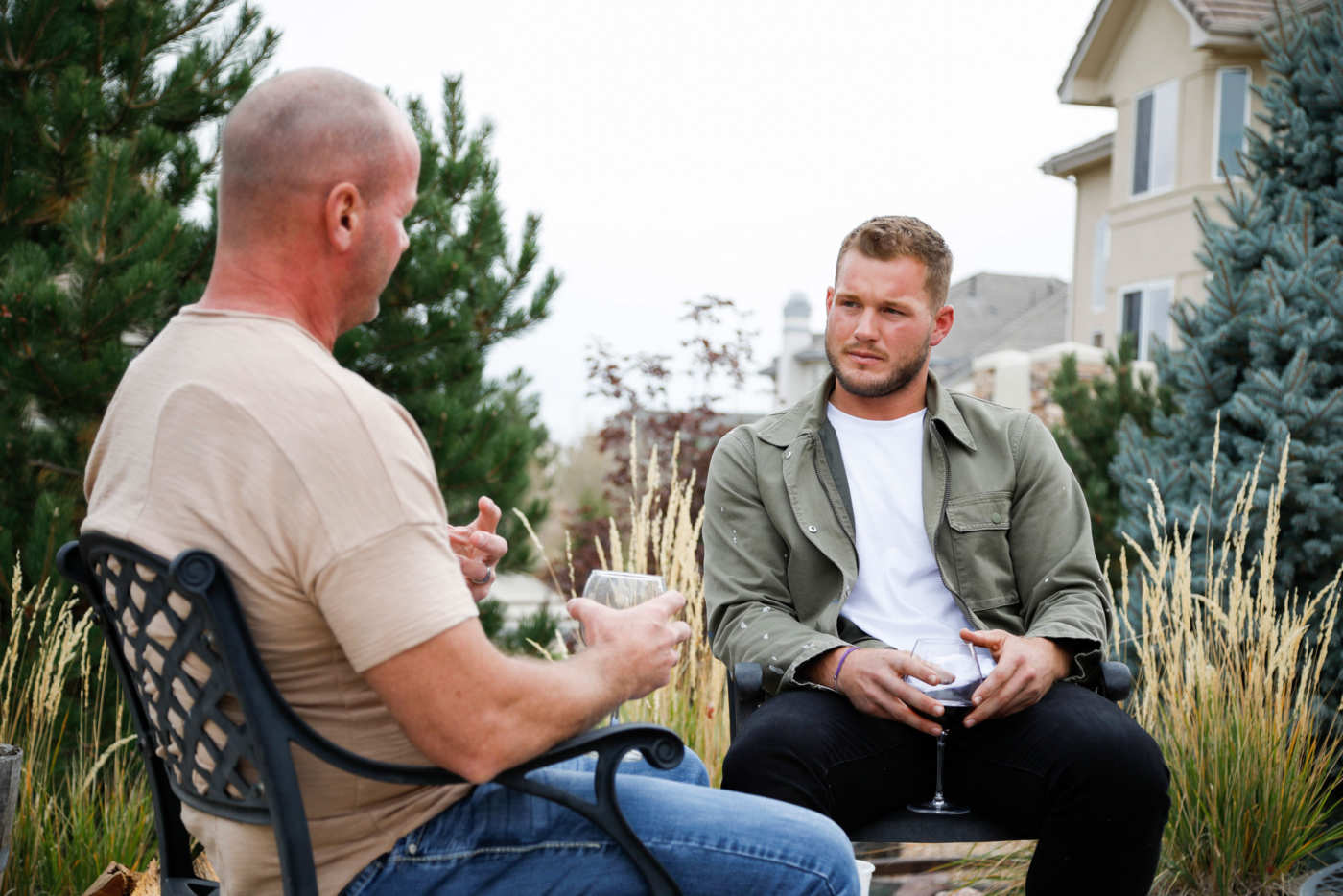 Hi Friends! This week on The Bachelor, Colton wants the girls to spill the tea and yet… he already knows what he wants to do! The team goes to Denver to spend time in Colton’s hometown before they get to to their respective hometowns. Also, this is the last time that any of these girls are ever going to see each other until the Women Tell All. Let’s get into the mess.

YEA! We got to see Ben Higgins for a split second and it was wonderful. Ben has grown on me so much since his time on the show. The producers clearly love him and Colton trusts him way more than Chris Harrison. They talk a bit about “the journey” and Ben tells Colton to trust himself since he is the only person who knows what he wants. Thanks Ben.

Tayshia and Colton spill the tea

Right off the bat, Colton takes Tayshia on a “Saturday afternoon” date where they go grocery shopping, wine tasting, get ice cream, and walk his dog. Cute, right? Colton has been pretty focused on trying to sniff out the rat among the group so he is asking the girls he trusts the most to tell him the truth. He asked so Tayshia told. Colton needs to take another look at Cassie and Caelynn. They don’t want to get married and they aren’t here for the right reasons. Colton is shook. This is his worst nightmare. They go back to Colton’s house to make some unseasoned salmon and make out in his bed.

On Caelynn’s 1:1 date, Colton takes her snowboarding. This is a great bonding activity date, but also, can be extremely exhausting. After a few runs, they sit and chat about what hometowns means to both of them. Colton mentions what he heard from Tayshia and Caelynn goes into a tailspin. She is instantly defensive and starts to come unglued. She ends up getting the rose at the end of it and the next day she tries to confront Tayshia about the “lies” she spread about her. And without flinching, Tayshia said what anyone would say, “I was asked to spill the tea, so I spilled the tea.”

Hannah B. spent her date with Colton’s family which is a bit of a bold move for him since he so quickly decided that he didn’t like her. They had an awkward afternoon and she knew something was up. He didn’t involve her in the “here for the right reasons drama” and his dad even said, “You gotta cut out asking every single girl what is going on behind the scenes. Make a decision.” Hannah B gets the chance to tell Colton’s mom that she is falling in love with him, but to no avail. She goes home quickly at the end of the evening, but before she leaves she also drops some wisdom on Colton abut being careful of who he chooses at the end of this. Maybe a thinly veiled dig at Caelynn?

All Aboard the Hogwarts Express

For the final group date this season, Colton takes Kirpa, Cassie, Heather, and Hannah G to Hogsmeade where they sit and talk. Heather almost instantly excuses herself from the conversation and sends herself home unceremoniously and now we’re left with three women. Kirpa is next to answer this week’s big question and she names Cassie as the second shooter. Cassie does the exact same thing that Caelynn did—she was defensive and starts crying instantly. She then confronts Kirpa in the same way that Caelynn confronted Tayshia. Kirpa presented just the facts and Cassie went wild. Later in the evening, Colton gives Hannah one of the date roses almost upon arrival at the evening date leaving Cassie and Kirpa to duke it out. Obviously, he picks Cassie.

Next week, we’re going to hometowns!