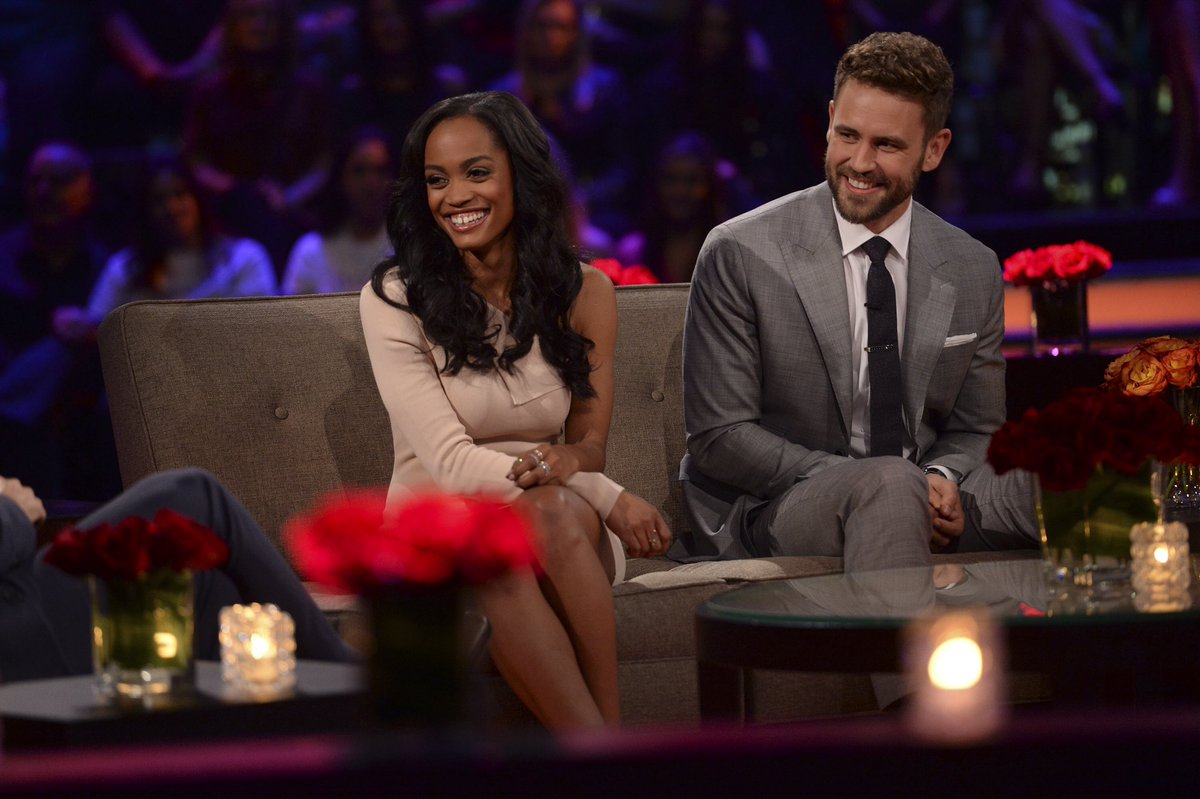 I hate this show. There are many times when I watch this program and I think to myself, how did it get this bad? We spent three entire hours watching this show listening to the same general professions of love from The Bachelor and the squacking of a bunch of women who hate each other. These are three hours I will never get back.

We started off three hours of hell by finishing the remaining hour from last week’s Fantasy Suite dates. Rachel and Nick spent most of the day cross-country skiing being crazy cute and having the time of their lives. And why wouldn’t they have the time of their lives? They are in the most romantic place in the world… Finland?! They make out a bit, Rachel falls on her skis and they feed reindeer. Rachel seems game for all of the fun, but she (like me) is not the kind of girl that has shoes for this kind of outdoor activity. At least they didn’t go camping… yuck. Later in the evening, the big thing on Rachel and Nick’s mind is when will the L-bomb get dropped. Of the remaining ladies on the show, Rachel is the only one who hasn’t said those three little words. You can tell that Nick is running through his mind of all the reasons that Rachel isn’t the one for him, but it seems like he can’t find a single reason to not run away with her in this moment. I know he can’t. The chemistry between them is electric. As a guy who needs an avalanche of validation it seems like he can’t get past Rachel only saying, “I’m falling in love with you,” (which was like pulling teeth to get her to say) instead of “I’m in love with you.” She spends the evening with him and I still can’t figure out whether or not they had a conversation about whether she wraps her hair at night. Either way, Rachel is still The Bachelorette so I could care less if they had a complicated conversation about the politics of black hair.

Then there was Vanessa. She had a lot of drama in this date and it seemed like every conversation Nick and Vanessa was really difficult. And for no reason. They started the show switching between a freezing cold ice bath and a sauna. It didn’t allow for a lot of deep talk, but it did amp Vanessa up enough to speak her truth later on in the date to tell Nick that her family and her lifestyle in Canada is very important to her. So important that moving away from Montreal might not be an option for her. Nick on the other hand relays a story about the one time he dated a girl whose family was really into her relationship and it didn’t work out so he didn’t want that to happen with Vanessa. Right. Their conversation (which continued into the evening) brought up a really good point that some people don’t really talk about in relationships, “What would you never compromise for?” Is it children? Is it your job? Is it wine? Whatever it is it is talking about what you value in your relationship can make how a couple navigates through life together easier, or harder, depending on your needs. The date ends well, but I can’t help but think that maybe Nick might not want to put this much work into Vanessa to compromise with her.

We get to the rose ceremony and obviously we know who goes home. It’s Rachel. Duh. Thanks for spoiling the season ABC.

Next we have two whole hours of The Women Tell All. I refuse to spend any more time talking about anything that isn’t related to moving this story forward. The lowlights include:

For next week, who will Nick pick and is it May yet?