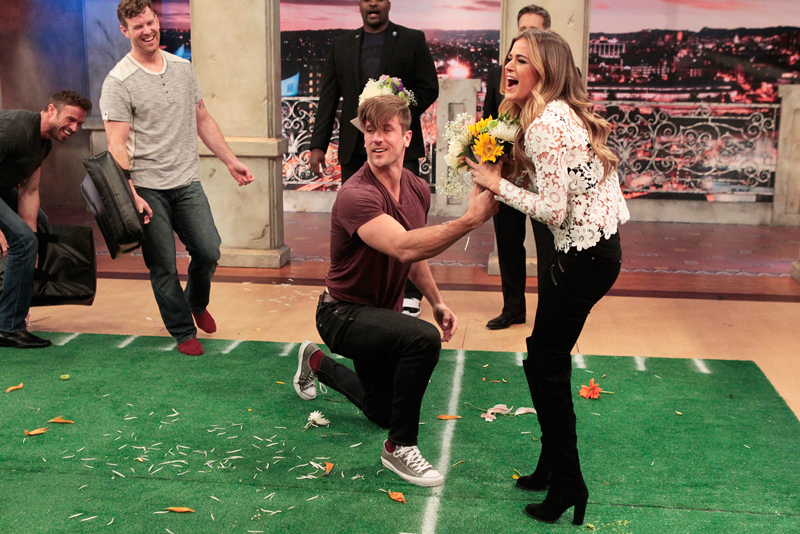 Baby Rodgers gets down on one knee at ESPN while Chad looks on, plotting his revenge.

Now that we are into the good stuff on The Bachelorette, it’s getting REALLY good. And on the second episode no less. We have a few front runners already and they aren’t even CLOSE to the guys we thought she would be into.  JoJo seemed to enact Kaitlyn’s advice from episode one to not even think about the guys she is super attracted to and instead focused on the guys that she actually enjoys spending time with. I love that she is taking a departure from just picking meatheads and is going with the guys who would actually make you laugh like a human being. That is the guy you marry. Not the guy who does pull-ups with his own protein powder. No.

In this episode, JoJo decides to split the guys up into 2 group dates and one 1:1 date. The first has a firefighter thing happening and I was here for it. The guys on the date battled to spend extra time with our girl and of course the firefighter, Grant, came through victorious. Our boy Wells didn’t fare so well, but he did get a pity rose for his suffering. He’s the best.

Meanwhile, the guys have decided they hate Chad. Chad has also decided that he hates everyone else except JoJo. Sounds normal, right? WRONG. Chad broke the unspoken rule of the show: You never trash the other guys and you never seem ungrateful in front of the Bachelor / Bachelorette. He broke both of those rules in record time. He also loves to compare the guys to protein and continues to eat everything in sight. Good for him keeping up his physique while on a reality show. You don’t see Hemsworth missing a meal even thought he has three kids, amiright?

Derrick also got a 1:1 date (which was kind of boring), James Taylor saw Fire & Rain this week and turned up the heat for JoJo and we will end up seeing some physical violence next week. Tune in for 2 episodes of the show next week and more swoons for Wells. Duh.

Budget Shopping: Create An Outfit For Less Than $60!