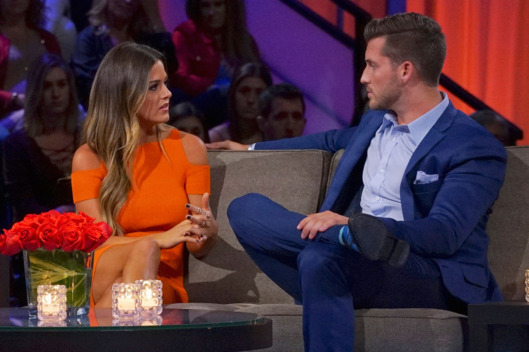 This week on The Bachelorette, we were blessed with two episodes. On Monday night, we saw JoJo get rid of cowboy bae, Luke and who the hell is that, Chase. Then last night, we were presented with our pool of goons (minus Wells of course) to hear what really happened this season on the show. Unfortunately we spent most of our time on The Men Tell All talking about the bane of our existence, Chad. The Chad was in full force and The Bachelorette producers made quite a production of his appearance on the show. After sitting through a horrendous Bachelor In Paradise trailer that featured the unholy union of Jubilee and Evan as well as Wells getting cozy with Ashley I. (I still can’t unseen it) Chad came out right at the head of the show to let everyone know how much dirt he had on everyone. On the one hand, I get it. This show is completely unreal in its expectations of how relationships can be built over the course of an 8 week show. Chad expertly plays on that idea. It’s ridiculous to assume that you could ACTUALLY fall in love with someone in that little time, let alone get married. However, there is a point where it seems weird that every, single one of these guys hates this man and he just can’t figure out why. Bro, if everyone hates you, its probably you! I hope we are done with Chad after BIP, but I can only imagine how the producers will continue to use him to their own benefit.

We also hear from Luke who is very clearly the front runner to be The Bachelor. He has all of the qualities of a guy who is looking for love in all the wrong places. He has just enough of James Taylor’s “aw shucks” attitude, Sean Lowe’s morals, and the hotness level to be perfect in the role. He even nailed his interview with Chris Harrison. His canned response to his shocking elimination made him seem “open” for another relationship… with 25 other women who are made to live in a house and have their lives taped. The one challenge I see with Luke is of course with the elephant in the room that the show has continued to struggle with: diversity. Can we really expect for Luke to choose a woman from a diverse background as a war veteran from a small town in Texas? I don’t have high hopes for it. Do we expect whoever ends up being in his final 3 (or 4) to be the kind of girl who would be open to having a diverse partner? I’ll say a smooth hell no to that as well. Maybe Luke will surprise us, but he most definitely will not.

Chase also gets to say his piece, but based on how great Luke was in his trial interview, this bro doesn’t have a chance to be American’s next golden boy.

JoJo came out at the end of the show to give more attention to Chad and also reassure the public that she is happy with her final choice. Personally, I don’t buy it. For a woman who had NEVER broken up with anyone until she was on this show, she doesn’t seem like someone who knows what she wants out of a partner. Clearly, based on her final two our assumptions are right. Hopefully next week, she will pick the lesser of two evils.

Why We Sometimes See Our Era As The ‘Good Old Days’