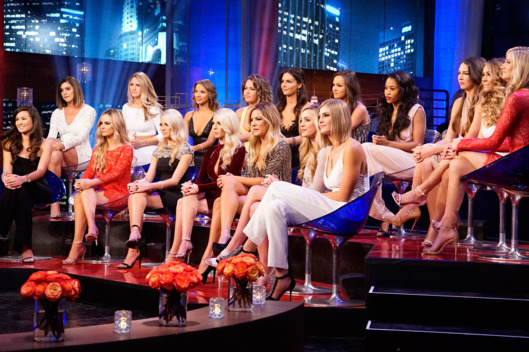 Oh boy. I mean… oh girls. You know how people sometimes say things that make no sense or they flat out lie about things in order to save themselves or they are so down on themselves that we decide to reward them by giving them their own show? That’s pretty much the premise of this season’s Women Tell All episode of The Bachelor.

We sat around and listened to Leah try to convince Ben, Chris Harrison, and the audience that she wasn’t a liar.  We also listened to Jubilee talk about the true experience of being on the show – warts and all. We had the pleasure of sitting through Olivia fake cry about being bullied and Lace, well… she was something!

Jubilee went into the real crux of the show – how the emotions are real and so are the experiences with the rest of the girls, good or bad. She talked about how The Bachelor isn’t perfect and neither is she. Ben was as much to blame for the demise of their relationship, one that Chris Harrison swears up and down that Ben was invested in, as much as she was. She even got him to admit it on the show. No small fete for a man who is so scripted to think he is wrong! I still love her and I still want the best for her. Maybe one day, some awesome guy will come and find her and carry her off into the sunset.

Caila tried made a case for herself in the hot seat, but all she basically said, “It was really hard.” For this to be her interview to machete audience consider her to be The Bachelorette, she blew it. She said nothing of consequence about Ben and she barely pontificated like she needed to in order to solidify herself as the next star of the show. My money is still on JoJo, the potential jilted lover as our girl for The Bachelorette. She has a great back story (especially once Ben dumps her), she fills at least a piece of the diversity quotient they are looking for, and her brothers make for great TV.

This show (The Bachelor, that is) has turned into a case study on how the modern millennial woman needs constant validation in order to function as a human being. It seems strange that these women needed so much from Ben to feel whole rather than giving themselves or each other that kind of validation. Maybe we will get more confident women on the show when we have a Bachelor that values confidence more than vulnerability. Also, when did the women on this show forget that this is a GAME SHOW?! Some people will be blindsided. Some people will get left behind. You will get broken up with on this show. Its how someone wins and how someone loses. Like any other break in a relationship, you have to deal with it and move on.

Next week, Ben makes his final choice. The preview makes it seem like it might be a doozy, but we all know how this thing is going to end. We will all have to shrug when we see Lauren B. and Ben on the cover of Us Weekly with Neil Lane’s multi-carat ring taking center stage. Yea? I guess…

MORAvational Monday: Insecurities Through The Holidays

Budget Shopping: Create An Outfit For Less Than $60!

Strategies For Keeping Your Skin Youthful And Glowing