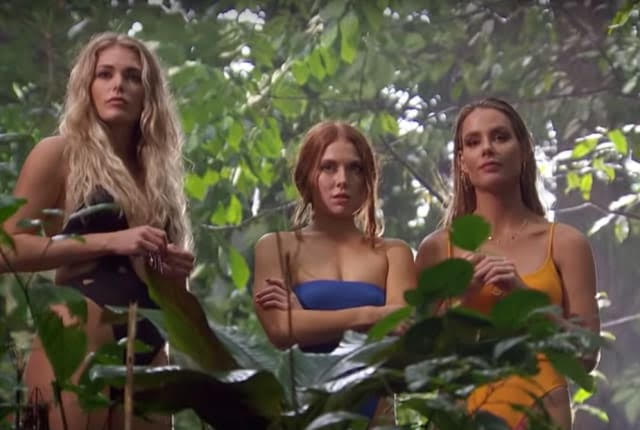 This week on The Bachelor, the trail of tears continued as they went to their second destination of Costa Rica. While there we continued to hear about how the contestants were upset about the lack of time they were spending with Peter, among other things.

We start the episode in Cleveland where Alayah has ruined everyones everything. Peter, now realizing the error of his ways, decides to send her home. Probably about 2-3 hours later he sends a few other girls home too.

Ahead of the first 1:1 date, Peter revealed one of his deepest scars to the ladies. It was a recent one actually! While filming the show, Peter hit the corner of his head on the roof of a golf cart and in an effort to stop himself, he banged his head into a glass. The cut gave him 22 stitches and a wicked scar.

Later, Sydney and Peter spent the day together on a helicopter, had a picnic, and then had dinner. Nothing too intense was revealed other than Sydney’s struggles with systematic racism while growing up in Alabama, her challenges with her own identity, poverty, and only having met her father 5 times in her entire life. NBD. Peter then decides to share his own culture with her (he’s Cuban, remember) and gives her the rose. They make out. Good for them.

Tammy tries to comfort Kelsey who has been crying about Peter dating 15 other women for 4 days straight. Kelsey acts crazy and Tammy doesn’t have time for it. Instead of keeping it to herself, she blabs to the other girls about how Kelsey is having a mental breakdown and popping pills. The truth of the matter is that Kelsey’s been excessively drinking and taking her daily recommended dose of Aderall and birth control.

Cosmo Magazine flew all the way to Costa Rica for a photoshoot with Peter’s gals and the lucky winner would be featured on their March 2020 cover. Exciting right? I feel like the dates this season are an influencer’s dream. Either the producers are finally getting wise to everyone’s intentions or brands are starting to understand the pull of Bachelor Nation. Either way it worked out. Victoria F. ends up winning the date, but earlier this week, the editor-in-chief of the magazine released a statement saying that they would not be using the photos of Peter and Victoria F. for their cover. After it became known that Victoria modeled for a sustainable fishing brand that used “White Lives Matter” and “Blue Lives Matter” in their marketing with confederate flag style logos they decided against it. The EIC said, “Unequivocally, the White Lives Matter movement does not reflect the values of the Cosmo brand. We stand in solidarity with Black Lives Matter, and any cause that fights to end injustices for people of color.” You can read the full statement here. After all of that, Tammy and Kelsey get into it because Tammy said Kelsey was mentally unstable. I don’t even remember who got the rose.

Keeping it Real with Kelley

It’s been some time since Kelley and Peter have spent time together. I think it was the first episode where she won the challenge that allowed her to take a flight with him for about 20 minutes and he lifted her up on a pool table at the same hotel where they met. Since then, Kelley has been far removed from all of the drama in the house. She’s been, as I like to say, one of the quiet girls who has made an impact. Their 1:1 date is a traditional Bachelor “spiritual experience” (ie: tantric yoga, massages, voodoo something, etc.), but Peter’s concern is if Kelley is even into him. Frankly, she says, it’s pretty hard to be into him when he keeps making bonehead decisions. Fair, but does she want to be married? She does, but she wants to marry someone who is on her level. She promises to do better and Peter believe’s her! She get’s a rose.

Since Kelsey is so preoccupied about what Peter thinks about her and making sure her reputation stays in tact, she goes over to Peter’s place to pleaded her case. As we know, it is frowned upon for contestants to go to the living space of the lead during the competition. She does it anyway and convinces him that she is here for the right reasons and that she’s not crazy, just emotional. He gives her a rose where there was no rose to give. Later, Kelsey comes back to the house, rose in hand in the middle of the day while the girls are getting ready for the cocktail party. Then Chris Harrison comes in and announces that the party is canceled! Not only did Kelsey take a rose, but her actions may have caused some other girls to go home. Tammy gets cornered about the things she said about Kelsey and Mykenna can’t keep her tongue in her mouth. Literally.

We have another episode coming up this week on Wednesday! Will we lose more people and finally get clarity!? Probably not!

Check out the episode here!

25 to Life: A Warrior with a Gypsy Spirit

Pet Health: My Journey With Bronx