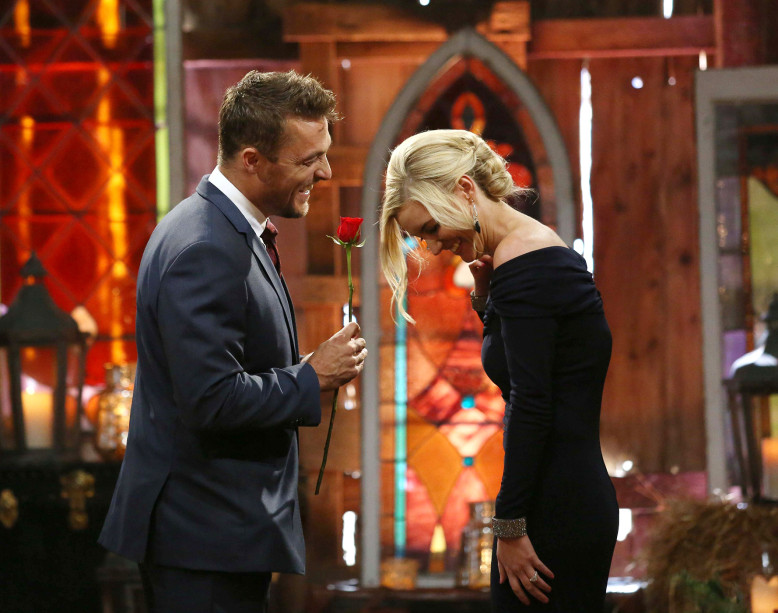 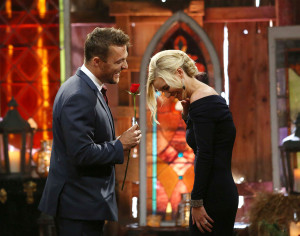 Chris and Whitney giggle  after their fairy tale engagement in The Soules Family Barn on The Bachelor Finale.

It’s finally over and Chris did the unthinkable… he chose the one woman (Whitney) that we all assumed he would end up with and will take his beautiful fiance to LA for a few weeks while he is a contestant on Dancing with the Stars.

After a week or so in Arlington, Iowa, Chris brought his final two — Becca (the virgin) and Whitney (the fertility nurse) to have a final meeting with his family. Chris’ insecurity of being from a small town (and loving it) was palpable through the entire season. I really appreciate Chris spending so much time in Arlington this season as opposed to “faking the funk” and traveling to all of these exotic locations to fall in love. Whitney was damn near perfect in her “interview” with Chris’ family. It all worked. Whitney had the tears, the desperation, and the plaid necessary to gain The Soules Family approval. The honest conversations Chris had with his sisters and the men of the house (his dad and his brothers-in-law) after meeting Whitney proved that this family is kind of amazing. Midwestern people tend to be like that 🙂 They wanted Chris to make the best decision in picking someone who would fit seamlessly into their life and into the family. An articulate family who wants nothing but the best for their child?! IMPOSSIBLE. Later, Becca came to ruin the entire experience by being 25 and unsure of what she wants out of life while Chris tried to force her into to committing to him. She wasn’t having it. I could sense the relief on her face (and in her body language) when Chris didn’t pick her for the final rose. Becca will be just fine being a chiropractors assistant swiping right on Tinder for the next few years of her life and will think of her time on The Bachelor as a hilarious antidote in her life. I don’t blame her for being honest about her feelings. Face it Chris, “she’s just not that into you.”

Now on to the magic of After the Final Rose and The Bachelorette announcement. Chris Harrison announces that we will have not one, but TWO Bachelorette’s this season. “Fan Favorites” Britt and Kaitlyn will be vying for the crown of Bachelorette in the premier on May 18th. First of all, read the room, ABC. Over the past two years (the beginning of which I believe started with the release of Beyonce’s epic album) feminism, #AskHerMore, and He for She has been on everyone’s lips. Why make two women fight each other and let a group of dummies choose which one they would rather compete for. Isn’t that the direct opposite of the point of The Bachelorette? That being said… #TeamJade.

See you in May!


[Podcast will play automatically — click here for the player]

Give Me Mora That VIBE Apparel Co.