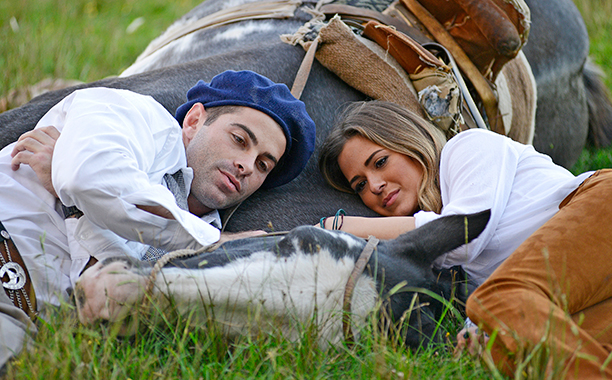 I wish you guys could hear the audible, dissatisfied sigh that I am letting out now that we are so close to the end of this… thing. This season of The Bachelorette had so much potential. With all of this talk from JoJo to “find her unicorn,” I (and many of you I’m sure) thought she was actually serious about meeting a guy that was completely and totally different than the other guys she dated. Because of these huge and grand statements, the producers gave her a unique crop of gentlemen. I should have known better when the first shot of the episode featured our girl packing her belongings up into a Louis Vutton duffle. Not that there is anything wrong with that, but a girl like that isn’t interested in making a life with the Wells and James Taylors of the world.

We had a million dates this week and none of them amounted into anything. Alex got a 1:1 date, his first and spent the afternoon spooning horses and appropriating the gaucho culture. He told our girl he loved her and then was kicked off because once he overcame his brand of vulnerability (which is punching things and not talking about things) JoJo decided she wasn’t into it. Then the goon Jordan got his second 1:1 date where he was able to swirl wine like a Disney villain. At their evening session, JoJo asked him about his relationship with his family and Jordan, whose famous brother has been the topic of conversation since it was leaked that he would be on the show, said they had a contentious relationship. DRAMA! Do we believe him? I sure as hell don’t. Let’s see what his family says when they meet up next week.

We also got a group date with Chase, Robbie, and James Taylor that was uneventful other than putting the final nail in JT’s coffin and a 1:1 date with Luke that wasn’t completely terrible.

Next week, I will try to have a better attitude about who is left on this show. However, since these guys look like the kind of bros that send late night f*ckboi texts or try to tell you they have feelings for you, but “it’s complicated,” I have a feeling that the rest of this season will feature me hate watching until we get to Bachelor in Paradise.

Skin Whitening After You Have Been Sun Burnt

My 30 Day Place Of YES Challenge

A Quick Trip To Barcelona, Spain