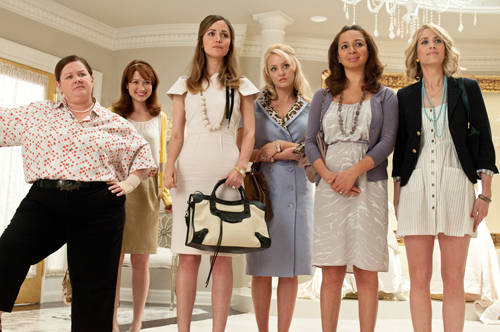 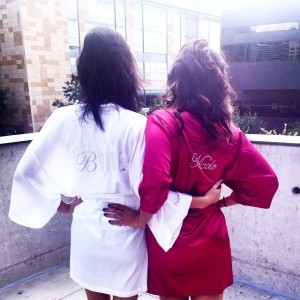 either being Punk’d or being filmed for a new show called “The Real Life Version of the Movie Bridesmaids.”

Let me give you some back story. My cousin and I are very close. When she asked me to be her bridesmaid, I was both elated and honored. Growing up, she was a sister to me and we always had the best time together. Then I realized she had both a Matron of Honor and a Maid of Honor. Her Maid of Honor was her best friend from college. I was a little jilted by the fact that she chose someone she’s known not even 10 years over a lifelong relationship she’s had with me, but whatever, cool. Her Matron of Honor was her best friend from childhood. Totally reasonable. Totally get it. Not my wedding, and not my place to say anything (except on here, obviously).

So, I couldn’t make it to the bachelorette party or the bridal shower due to work. Yeah, real life happened and I couldn’t travel for a weekend to either. Sue me. Really shitty timing, but unless you’re planning on paying my paycheck for the work I’ve missed, don’t get mad. Sorry about it!

Last weekend, the time finally came to see my beautiful cousin get married. This was the first wedding on my mom’s side for any of the cousins and we were all so excited. I mean, I missed attending Fashion Week in New York City to be there. I wouldn’t do that for anyone unless I really loved them, let’s be real.

I show up to the wedding rehearsal and make a joke to both MOHs that I hope the rehearsal is done quick so I could go out to the pool and finish reading “Gone Girl.” Clearly queen Matron didn’t like that because she thought it was appropriate to look at me, laugh, and say, “It’s not all about you…I’m just kidding…but like, it’s really not about you.” 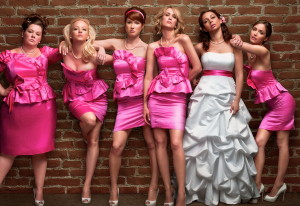 Being a lady and not wanting to start any drama, I laughed it off and made a joke about how it wasn’t about me, it was about the freaking book that was getting juicy. Learn to take a joke. I’m there, aren’t I? Get that stick out of your ass and laugh a little. [highlight]Strike one.[/highlight]

It’s time to line up for the wedding rehearsal and I turn around to ask the bride if the wedding party will be dancing down the aisle or just walking. I come from a huge persian family where everything is always one big party, and people have a dance party down the aisle. Very logical question to ask if the bride wanted the same. The Maid of Honor, however, thought it was a stupid question, gave me a death stare with her big beady eyes and asked me if I wanted my head chopped off. UHM. No, actually, that’s why I asked the question so that I would prevent getting my head chopped off for doing the wrong thing you twat. [highlight]Strike 2.[/highlight]

Where are the cameras? This cannot be real life, these women are 28+ years old.

By this point, we’ve all practiced walking down the aisle — it’s really not brain surgery — and the wedding planner is discussing things with the bride and groom. The groomsmen aren’t paying attention, the bride’s brother is off sitting on his phone somewhere and everyone’s just chatting amongst themselves. So I start talking to the groom’s sister (who I adore) and we’re laughing and talking about our hair for the following day until queen Maid turns around, gives me the evil eye and goes, “SHHH!”

HOLD UP. Are we 12? Did you just SH me? You have got to be fucking joking me right now. I was so appalled that I had no idea what to even respond to that except to laugh and say, “uh, don’t shush me!” And she still decided to continue.

Maid of Honor: Don’t get sassy with me just ’cause you’re not allowed to dance down the aisle!

Me: Don’t get sassy with me because I will out-sass you and you can best believe that, hunny.

*Maid of Honor proceeds to huff and turn back around.* [highlight]Strike 3.[/highlight] At this point I’m still waiting for Ashton Kutcher to come out and tell me I’m being Punk’d.

Mind you, I had to deal with both MOHs taking the bride away from me mid-convo the entire time to hug her and keep 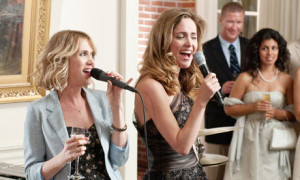 her to themselves. I felt like Kristen Wig’s character, Annie, in “Bridesmaids” where Helen tries to prove she’s so much closer to their BFF. Yes, apparently this shit actually happens in real life! Who knew? Not me — until this past weekend.

Clearly some shit went down on the bachelorette because I have never seen women act like this for no reason. We are here for a wedding, and you can’t just shut the fuck up for 2 days?

The bride asks me to apply more blush on her and queen Maid who would be the last person I ever took make-up advice from simply because she doesn’t know the first thing about hair or make-up, thinks I’ve put too much on our girl. Kick it for a second and let me finish my job before you give your worthless 2 cents. This girl was just out to find something to complain about to make herself feel better. Instead of politely saying, “oh maybe it’s a bit much”, she just makes a disgusted face. OH BECAUSE THAT’S REALLY HELPFUL. [highlight]Strike 4.[/highlight] But you know how the saying goes, 3 strikes and you’re out.

Finally the wedding day is here and I still am sucking it up and going about my business as if I didn’t hate the Maid of Honor (to be honest, the Matron was tolerable). Once the ceremony is over I bee-line for the bar, drink my life away, and ignore the BS. The party is over and the after party is at the bar downstairs for anyone who wants to come. I make my way into the bridal suite, dying to change out of my long, heavy dress that, to be real, I didn’t feel good in. However, heavens forbid I change in front of the Maid of Honor. Please see below for my drunken conversation with the psycho:

MOH: Wait, you’re changing out of your bridesmaid dress?

Me: Yeah, I’m dying to take off this dress.

MOH: Oh please, you’ve been dying to take off that dress since the second you put it on.

Me: Actually, no that’s not true and even if it was who the fuck cares. I wore it for the wedding and now I’m taking it off. It’s not for me, it’s not my style and sorry, but in all honesty I’m really not sorry.

Can we not right now? The wedding is over. I no longer need to be nice to you. Mind your own business and quite frankly, pop off. Seriously, I could not believe this was not being filmed for a reality show. It was disgusting to see a woman who is older than me act more immature than my 15 year old cousin. I thought I was going crazy until the rest of the bridal party commented on how rude the MOHs had been to me. Absurd. And that leaves the whole debacle at [highlight]5 strikes. [/highlight]

There you have it, my very old real-life version of “Bridesmaids.” I hope you enjoyed the read as much I enjoyed venting.