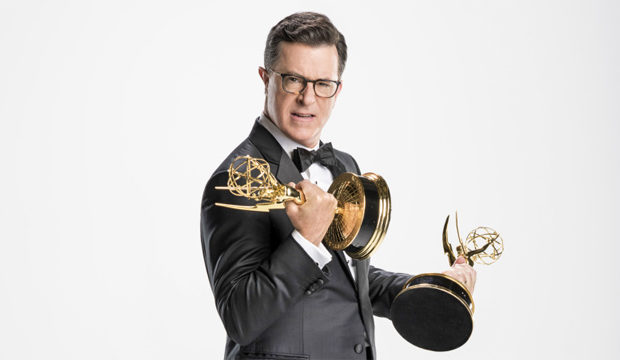 The best day ever is here: The Emmys! Each award show, you all always ask for some Mora and this year, we decided to step our game up!

Give Me Mora will be updating this blog post with every commercial break! I know you’re all used to the final recap after each show, but now that everything is on-demand, we decided to keep up with the times. I’m excited!! You can also tweet along with us using #GiveMeMora on Twitter. 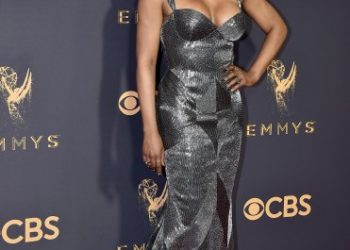 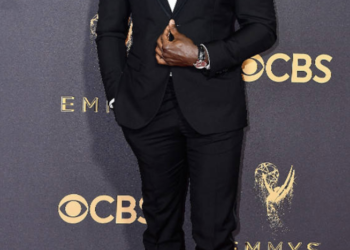 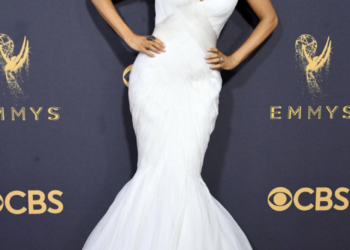 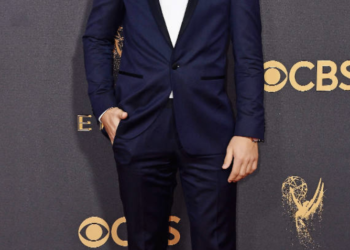 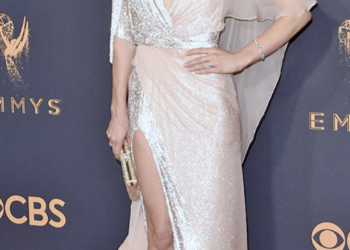 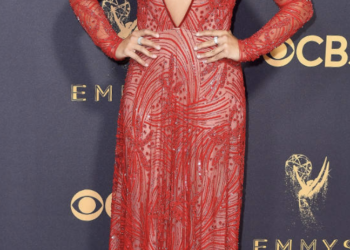 The host tonight is Stephen Colbert and I’m just praying he stays away from political jokes – we have enough of those. It really is the new Golden Age of television! I don’t see network TV (CBS, ABC, NBC, FOX) sweeping up too many awards BUT “This Is Us” is sure to be a hit for NBC. I called it my TV pick of the year last year and I’m so happy the critics (and viewers) agree!

Stephen Colbert had a great opener! One of my favorites over the past few years. There was of course Trump jokes, but at least they were hilarious. Can you believe we had over 450 scripted shows just this year?! 92 nominations just for Netflix alone. Colbert gave us some great jokes and I love that he touched on the evolution of television and how it is the most diverse list of nominees in history. Times are really changing and I am here for it!

The Crown has already picked up a win and I have a feeling it’s going to be a BIG night for the Netflix series.

Hold up! Do we love the guy narrating The Emmys? I’m kind of obsessed with him. Comment below if you’re feeling his vibe!

Donald Glover wins for Best Directing in a comedy series for Atlanta!!!! He created the FX series, writes for it, stars in it AND directs it. You guys, Donald Glover has been on the up and up for ages now. I was following his career over 7 years ago and now he has officially hit the big times. Well deserved! They say it takes 8 years to be an overnight success and it’s definitely taken Glover a little more than that but his time is NOW. Could not be happier.

Can Seth Meyers and James Cordon co-host next year? They had me dying laughing. And of course, Alec Baldwin wins for his impersonation of Trump on SNL. The academy and politics…smh.

Hold up AGAIN! The ladies of 9-5. They’ve all never looked younger – I’m looking at you, Jane Fonda. Woah. Can ya’ll give us your secrets? Is it just plastic surgery? And also why did Alexander Skarsgard kiss Nicole Kidman on the lips on his way up to accept his award?? I have so many questions right now!!!!

It’s a big night for Hulu! Ann Dowd wins the Emmy for Best Female Supporting Actor in a drama series for The Handmaid’s Tale. You can tell she was not expecting that win, but her speech was so cute. NYU alumni are all rejoicing tonight.

…And we’re back! Things are getting exciting again as Donald Glover wins again for Best Actor in a comedy series. Also, I’m digging his suit. 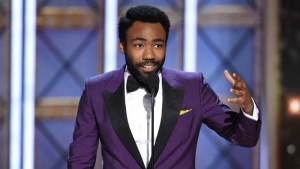 Julia Louis-Dreyfus out here breaking records! VEEP is about to film their final season and I’m wondering what TV show we’ll see her on next. I’d like to see her in a drama.

FINALLY a win for The Night Of!! The diversity tonight is lit! Wins for all ethnicities and genders is a win for humanity. Also, Riz you’re really hot.

Nicole Kidman wins her first Emmy for Big Little Lies! I love that the first thing she did was credit Reese Witherspoon – girl.freaking.power. And now I’m crying like a baby during her speech. Cute.

Sterling K Brown with the This is Us WIN!!!!!! Yes.Yes.Yes!!! OMG I am living for him. Great speech and such a real talent.

Jesus, what a win for Hulu tonight. I was not expecting that. Elisabeth Moss wins Best Actress in a drama series – beating out the queen, Viola. Loved her on Mad Men, love her on Handmaid’s.

The Handmaid’s Tale officially swept tonight. That is crazy.

What a time to be alive.

And the Emmys are officially donezo, which means I can go back to my regularly scheduled programming of real life! Until awards season in the winter….

Thanks for staying updated with me! Live blogging was fun! Did you like it?

Why Getting Comfortable Isn’t Always A Good Thing…

An LA Girl Takes On ACL