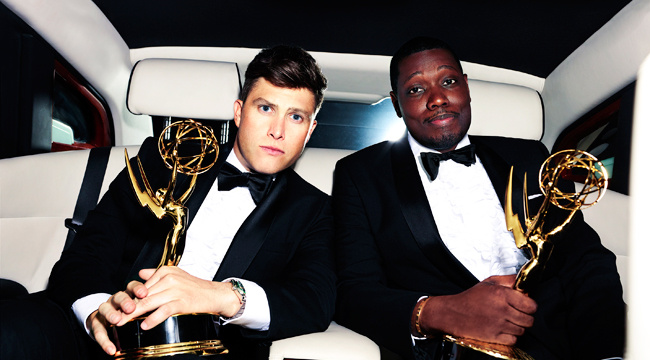 The Emmys are here!!!! I’m so excited because it is the most diverse list of nominees in history and you best believe it will be the topic of convo the entire night.

The intro musical number is everything! Ricky Martin! If I don’t die.

Told you I was right about the hot button word this year: diversity.

I love when awards shows have two hosts – they’re able to play off of each other AND the audience. Michael Che and Colin Jost did a great job opening it.

Henry Winkler finally wins an Emmy after 43 years!!! What a beautiful moment.

“If you stay at the table long enough, the chips come to you. And tonight, I got to clear the table.” – Henry Winkler

The Emmys the past few years have kind of been boring, to be honest. They’ve spiced it up and it’s dragging on a lot less than normal. AKA I can actually pay attention and not zone out.

Could this be the first proposal in Emmys history?! I’m crying. Super cute.

Alex Bornstein has a case of nipple-itis and I can’t get enough TBH. I have a feeling The Marvelous Mrs. Maisel will be sweeping tonight.

With Rachel Brosnahan winning the Golden Globe this year for Lead Actress In A Comedy Series, it was a safe bet she would win the Emmy. I’m happy for her – she’s young, talented, and she kills it.

John Legend and Chrissy are #relationshipgoals.

Claire Foy for The Crown! What a way to exit the show. I’m still angry they didn’t just keep the original cast and age them through the years but WHATEVER.

Betty White has been the best party of this entire thing. Let’s be real. She’s my hero.

The Outstanding Drama Series category was packed with so many great shows, but you know I was rooting for The Crown! Of course, it went to Game of Thrones. *yawn* Can that show just be over?

Okay, I’m out. Nothing else to see here, folks.

Now I gotta go watch all of the TV I never got to.

To the naive person inside of you…

Simple Ways Of Bringing More Hits To Your Blog