It’s funny, my whole life I had this fear of failing. Anyone else?

Maybe it was the control freak in me or the want to just be this perfect person, but for several years I simply did not allow myself to fail in any aspect of my life.

[highlight]It was when I was failing that I was actually winning.[/highlight]

Each time I failed, I learned. And every learning experience made me not only do better, but BE better.

Every ‘no’ made me work for that ‘yes’; it made me want to prove every single person wrong. The second someone doubted me and my abilities, it was game on. I’m competitive like that — and I really like to be right.

There were so many times I didn’t get the part or get the job. Hell, there were times I actually got the job and still 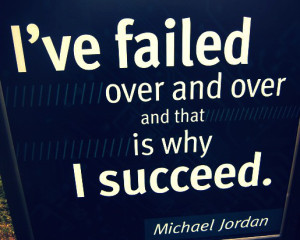 I recently read somewhere that the most successful people in business got to where they are today by never giving up after failing, and that it was in their failures they found ways to grow and become better entrepreneurs.

Sometimes we don’t even find our way until we fail. When I started thinking about launching this site, I had just got done filming ROADIES. Here’s a fun fact: to me, that film was a failure. I’ve never publicly admitted that, but I felt like I had failed. The trailer came out great, but the whole experience was not what I thought it would be, and thus, making it a failure for me. I had such high hopes for what it could be, and reality versus what was in my head were completely different. But, what did work while I was away was that I was blogging about the experience on Tumblr. And through that, I found my way. I also learned that I really am much more of a TV producer than I am film. So there you go: I realized what I don’t want to get into and what I do. And that is priceless.

[quote]Failing as a boss, actor, host, writer and everything else I’ve dipped my feet into, has made me BE better at all of those things. [/quote]

The same goes for relationships. I never let myself get into a serious full-blown relationship out of fear of it not working out in the long run. Where is the fun in that? There is none.

I used to be the girl that played games to win and have things end on MY terms. Once again, life doesn’t always work 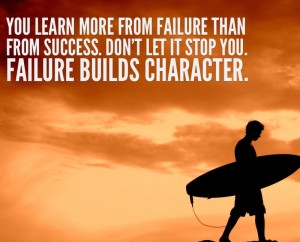 that way. Because of this, I didn’t really know what I wanted, the only thing I was sure about was that I wanted to win. No one was going to win and break my heart. Until they did. My heart has been broken a few times, and I can honestly say I am better for it. I’ve learned what I want and what I don’t want, what I will and will not settle for, and what I deserve. Failed relationships cause you to grow and evolve — for most people, anyway. Had I not had tried and failed, I would still be stuck in a high school and college mentality.

I am a better person from failing because I have allowed myself to let go of the fear.

So every time you fail, remind yourself that you’re still winning.