Hi everyone! I’m so excited about this Q&A I got to do with producer, writer, and director, Eve A. Ma! I love a woman who crosses boundaries. Peep our interview below! xo[typography font=”Cantarell” size=”15″ size_format=”px” color=”#ff6666″] NM[/typography]

Congrats on your film, Domino: Caught in the Crisis and thanks for taking the time to chat with us at [typography font=”Cantarell” size=”15″ size_format=”px” color=”#ff6666″]Give Me Mora[/typography] ! Let’s get right into it… 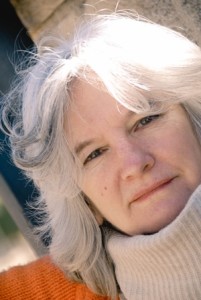 1) I understand that Domino: Caught in the Crisis is the story about a family man’s struggle to essentially make ends meet during a tough economic crisis in Spain.  I definitely feel the basis of the story you’ve captured in Domino is relatable to people all over the world, as we have all faced economic downfalls at one point or another.  What made you want to tell this specific story?
You are right about the theme, although the emphasis is on his trying to find some way to bring in money…another regular job, odd jobs for a neighbor – anything to make ends meet.  On top of his normal obligations (and the mortgage is overdue…), his oldest son is getting married, which is an additional financial obligation.  And yes, I feel that unfortunately, the topic is pretty universal. As for what inspired me: family members and friends, both here in California and in Spain, who are struggling.  Some have lost their homes, some are on the edge with no relief in sight, some are managing to climb out of the (financial) hole.
2) The film makes its American debut on January 28th at 7pm at the Rialto Cinemas Cerrito Theatre (note: admittance is free), where else are you planning on taking Domino?
We’ll show it at various cultural organizations and the like.  It’s not long enough for a regular theater run – it’s only 62 minutes long.  It has also shown in Spain and will continue to be shown there.
3) Were you scared to tackle this subject as your first full-length feature?
It was my first feature-length work that was also a drama, working with actors.  Yes, it was a bit daunting, but the actors were great and the crew did mostly a good job. There was one very complicated scene, which we had to shoot three times. I don’t mean three takes, I mean three completely different shooting dates, with the earlier stuff going in the garbage can.  I learned a whole lot from making this film.
4) Talk to us about casting for this project…what drew you to choosing actors like Antonio de la Malena, Nicolas Montoya, Luis de la Tota and Javier Padilla? Did you write the film with them in mind?
I did kind of write it with Antonio de la Malena in mind.  He is very charismatic and he emotes.  He just seemed perfect for this kind of story. Both Antonio and Javier Padilla helped a lot with the casting.  I already knew Nicolás Montoya. I knew Luis de la Tota but hadn’t thought of him for acting, but he did great!  Many of the other actors were introduced to me by Antonio de la Malena and Javier Padilla.
5) Eve, I know you have written, directed and produced Domino — that’s no easy task! What was the hardest part for you?
The hardest part…well…there were several. Getting the post production down right (sound sweetening, color correction). It still isn’t perfect but it’s acceptable. Handling complex scenes, like the one I mentioned above that we had to shoot three times. I had a few problems with 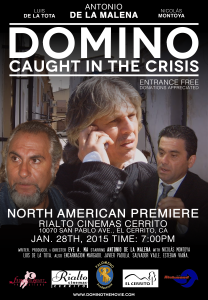 actors, including a couple of funny ones…an actor who got a bit tipsy on the set, which required us doing one shot 21 times because he couldn’t remember his lines. And then, I’m not strong in marketing – I’m a producer/director and a writer, not a marketer.  You asked for a candid answer!
6) I love that you like to cross ethnic, cultural, national and economic boundaries in your work! What has made you want to go that route? It’s quite scary to take on those topics knowing it can easily backfire.
The backfire part is that so few people want to cross those boundaries. They don’t want to look.  I could tell you lots and lots of stories on that theme. As for crossing boundaries myself, I’ve been doing it since a young age. My mother was a big influence in that, but my father also helped, and I speak several languages, plus my ex-hustand is Chinese…so my kids are half Chinese.
7) What’s next for you? What kind of project are you looking to sink your teeth into next?
What’s next? Well, I’m currently involved in three other projects (too many, to tell you the truth) all in different stages of production. One is almost done and national PBS is showing serious interest (but I don’t want to count my chickens before they hatch). I hope to have it done by March. One is in the early stages production, but production is slow because we need lots and lots of financing; I’m co-director on it and we hope to finish it in 2016 or 2017…after we get the money.  One is in a further stage of production and is less costly, but still we need some money…but I THINK I’ll be able to finish it by the end of this summer.
8) Any advice for future filmmakers looking to build a successful career just like yourself?
Advice for future filmmakers: go to film school (which I didn’t do) because it costs a lot less to learn in class than to learn from your mistakes (as I have had to do).  [highlight]Network, and listen to the advice of other filmmakers…even if you disagree, you can learn something from the reaction of others. [/highlight] Get your technical aspects under control.  There’s a delicate balance between making something with equipment you can afford, and making something of an acceptable quality. You need to be very careful as to what corners you are cutting. And finally, love what you do.  Otherwise, don’t do it.
9) Thanks so much for chatting with Give Me Mora! Where can people follow you?
You can follow me on my main web site, www.PalominoPro.com.  I have a monthly newsletter which you can sign up for at http://palominoprodvd-cd.com. We have several Facebook pages:  Palomino Productions, Domino the Movie, and the event invite can be found here! Thanks for asking and thanks for doing this interview!
Array Views
Other posts