The Importance of Portraying Women As Heroic in Films

Hope you all had a lovely Labor Day Weekend maxin’, relaxin’, playin’ all cool…

My friend from film school, Cassandra Brooksbank,  has an awesome story to share and I thought I would pass it along. She has always been such a bad ass and I know that, as a woman, she’s had her fair share of triumphs. Cassie is one of the people you go to school with and just KNOW they will make their mark in Hollywood. I’m so excited to welcome her to Give Me Mora! xo NM

I’ve been directing mainly in the commercial space since I graduated from USC. In that time, I’ve directed commercials for companies such as Porsche, Sony, Microsoft and Chevy. Ultimately though, my goal is to make action movies that star women in the leading role. I believe that society’s impressions of women come from their favorite stories, and if we see more heroic women portrayed more like James Bond than the Bond Girl, we as a society can get closer to a place of true equality. On that end, I’m making an action short (and eventual feature) called Thieves Die Alone. My film intentionally swaps the gender roles of the title characters — the woman is the hero and the man is the “homme-fatale.” You can find out more about the project on our kickstarter page here where I’m currently raising the budget to make it. 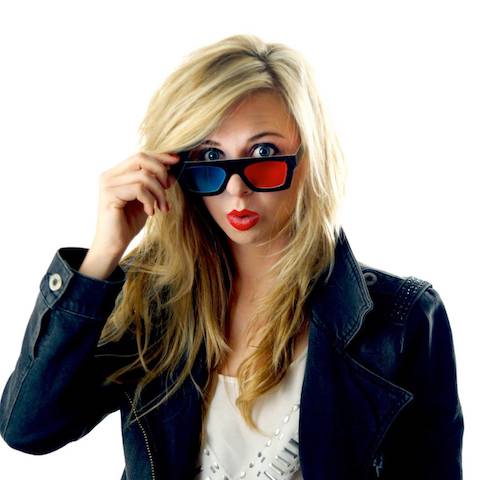 This is the Op-Ed piece I wrote for Wired PR Works:

TO BREAK THE GLASS CEILING, SIMPLY BLOW IT UP!

Imagine you’re watching a Hollywood blockbuster and the following unfolds on screen: The love interest is suspended over a tank of man-eating piranhas. Suddenly, the hero bursts onto screen.

They fight the villain and when all seems lost, the hero delivers a kill stroke and saves their one true love. FIN.

That’s not going to win any Oscars, but some version of this scene is in every popcorn movie this summer.

You could probably see it play out in your head — the damsel is some rockin’ blonde babe, the hero looks like Brad Pitt and the villain is an ugly (but talented) character actor.

But why assume the hero was a man and the love interest was a woman?

Nowhere in the description above did I specify… what if the damsel was the dude and the hero was the chick? We have been conditioned to see men and women in predetermined roles.

Why does this matter?

If blockbusters movies that most people see reinforce the idea that women aren’t heroic, it only perpetuates that idea in real life.

Representation matters. It defines our culture and right now, it’s not happening. A 2017 study by the University of Southern California found leading female roles rarely drive the action in film. Of the top 100 films in 2016, only 34 had a woman lead or co-lead. Action movies by far had the smallest percentage of female speaking characters at only 23 percent.

Obviously gender disparity is a problem that has upset the cultural apple-cart.

From the news-cycle to twitter, debates and outcry rage, yet no one really seems to know what to do about it.

There are serious crimes caused by power discrepancies between the genders (Harvey Weinstein and the men committing sexual assault named in the #metoo movement, for instance).

There is a very clear lack of women in positions of power and influence (we still haven’t had a female president from any political party).

It’s clear as a society we think this is a problem, yet no one seems to know what to do about it. I think the answer is, in fact, rather simple:

Now, before you roll your eyes and click off to look at cats dancing on youtube, hear me out.

Social norms are defined by pop-culture.

We can push “female-filmmaker programs” and “women’s initiatives” as much as we want, but in reality it’s not going to do much until we change the way society thinks about women.

And what society thinks about women is driven by popular entertainment. In Ancient Greece, that was theater and mythology. In Elizabethan England, that was Shakespeare.

Unfortunately, what all of this entertainment shares historically is putting women in subordinate roles.

Imagine a world where humanity grew up on stories where Hercules, Hamlet and James Bond were all women. It’s hard to imagine, right? We can’t even comprehend a person who’s both feminine and heroic. And there, ladies and gentlemen, is the problem.

If little girls grew up hearing stories where the best versions of themselves were expected to save people instead of being saved themselves, we might have a lot more women in positions of power.

Instead, we have a history of storytelling where women who have any personality at all are punished severely for it. Medusa. Antigone. Lady Macbeth.

Literally every femme fatale ever… come on. It’s like there are only two options. Be a dutiful wife and get captured and saved, or try to take a little power for yourself and end in despair and tragedy. Oh, and be hot. Always be hot.

With this message shaping our social consciousness, it’s no wonder there is a gender disparity.

Girls have to go against the grain to make something of themselves as individuals. The vast majority of movies, books, and otherwise tell them that becoming a powerful woman only ends in tragedy and despair. And for men, they’re conditioned to think women are merely beautiful objects to be won. We can change this by changing the stories we value as a society.

It’s arguable that Star Wars has done more to shape popular culture than the US Constitution. If we had more versions of feminine Luke Skywalkers and Han Solos, we could start making a huge impact on gender inequality. And that doesn’t just go for heroes, we need some female Darth Vaders too! People are flawed. Bond, Indiana Jones, and Batman all have issues. Guess what! So do girls! That’s good. We want women to be seen like men — with complexity. It’s what makes us human. Until men and women are portrayed equally on screen, they won’t really be seen as equals in real life.

So, how do we fix this problem you ask?

Support female filmmakers (and any filmmaker for that matter) working to flip the gender stereotypes. And if these filmmakers make fast, fun and light-hearted blockbusters, even better! Action speaks louder than words.

Contribute to Cassandra’s kickstarter to break the glass ceiling.

Knowing When To Leave The Party