I’ve spent much of this past year observing the people around me, reevaluating who I want in my life, and 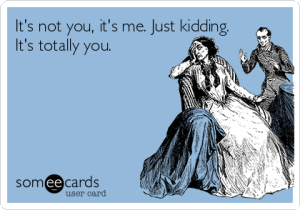 For so long, I just figured that maybe I’m the problem. Maybe I’m the one that’s too sensitive, too needy, too attached, too much of a drama queen or too intimidating.

And at times, that’s all accurate. I’m human and those are some of my flaws. We all have ’em.

But this past weekend it all kind of came to surface. I was having a conversation with some friends when it came up that some guys thought I was cute and were admiring me from afar. Well, for one I’m extremely flattered, but why don’t I know this info? Because not one has tried approaching me or tried talking to me.

Alright, that’s cool. [highlight]If you don’t take the risk, you may not get the reward.[/highlight] On to the next.

I spent my week with different groups of friends with the intention to just have a really good time. It’s summer, everyone is usually happier, and the weather makes us all want to stay out later, talk a little more and dance a little longer. I’m extremely fortunate in the sense that I’ve learned to surround myself with good people — not just good on the outside, but pure at their core. It’s a two-way street with nothing but genuine intentions.

So sometimes, it’s both easy and hard to point out the bad apple in a basket of good ones. In the beginning, I found myself feeling like maybe I was the problem in the friendship. Maybe I said something inappropriate, or did something they didn’t like, whatever. But as time as gone on, and their sour attitude has remained for months, I kind of realized it’s not me, it’s actually you.

Listen, everyone has insecurities, everyone has problems, everyone has things going on. I often put up a front that everything in my life is so okay that people oftentimes think I live a picture perfect life. WRONG. Everybody is fighting an inner battle at one point. Once you learn that, you also learn who is taking out their problems and insecurities on  you. And honestly, at this point, it’s not my problem.

I stopped taking everything so personal and moved forward with people (both romantically and non-romantically) that were not only secure with themselves, but confident in the world around them.

It’s never okay to take out your frustrations on someone else, to project what you’re feeling on someone else, or to throw out the judgement card because it makes you feel better. Do some soul searching and figure your life out. I did.

SXSW: Make Google Do It