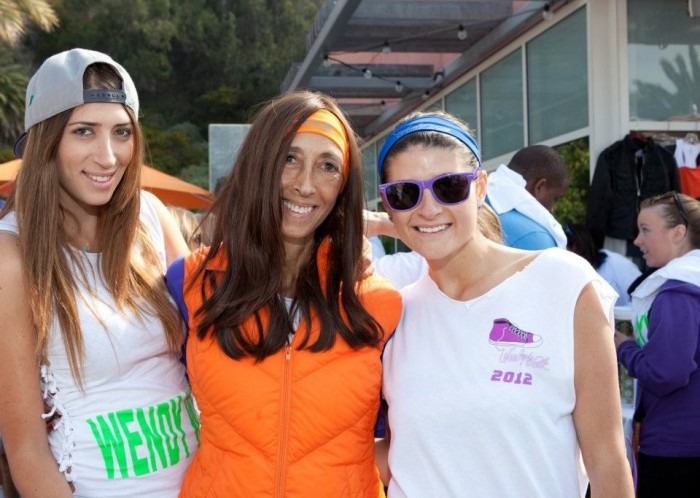 It’s been a really exciting week, and for me, this special post is the cherry on top. Normally for Woman On The Rise, I honor one woman who is making waves in their field of work; someone who inspires me and someone I believe you will see on Forbes ‘30 under 30’ list or The Hollywood Reporter’s Power 100. This month, however, I’m changing it up. I’m honoring two very amazing, inspirational and giving young women – so forget Woman On The Rise, this month I’m bringing you [typography font=”Cantarell” size=”15″ size_format=”px” color=”#ff6666″]Women On The Rise[/typography] ! I’d like to introduce you to Ali Landes and Jackie Landes: sisters & along with their brother, co-founders of [typography font=”Cantarell” size=”15″ size_format=”px” color=”#ff6666″]Wendy Walk[/typography] . Having raised over 2.1 million dollars since it began in 2010, Wendy Walk raises both funds and awareness for Liposarcoma research. For those that don’t know, Liposarcoma is a rare cancer that begins in fat cells in deep soft tissue.

Separately, the Landes sisters have accomplished a great deal. Together, they are helping change the world and 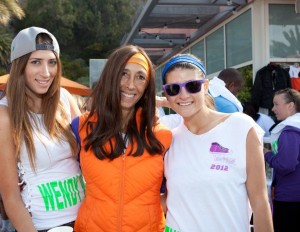 Ali Landes (28) lived in New York with her parents and twin brother, Matt, until they were 7, when they moved to Los Angeles’ Pacific Palisades. Growing up, basketball was Ali’s passion. It was through playing the sport that she realized the concept of having a passion and fell in love with the idea of teamwork. Knowing she wanted a real taste of the east coast for college, Ali attended Tufts University to play basketball. However, her time playing ball for Tufts was cut short when she decided to go to London to work in politics. After a semester in London, she went on to study at Oxford (as a part of the honors program, nonetheless).

When she returned from studying abroad and traveling Europe, she knew she was definitely going to pursue a career in the world of political science. During her senior year, Ali took a grant-writing and fundraising course that sparked a fire in her. The idea that one can paint a picture of someone’s need by telling a story that could make a difference is what made Ali ultimately choose to work in the non-profit industry. After graduating in 2008, she has worked with the currently mayor of New York City, Bill de Blasio as well as different causes and organizations such as Seeds of Peace.

Jackie Landes (23) attended Wildwood for high school, where she played Division 1 Volleyball and where she was also able to express her creativity through different mediums such as film. It was at Wildwood that she found her love of storytelling, which catapulted her into entering the film world years later. We’ll get into more of Jackie’s journey in a bit so hang tight!

In 2008, Ali and Jackie’s mother, Wendy, was diagnosed with a rare cancer called Liposarcoma. At the time, Ali was 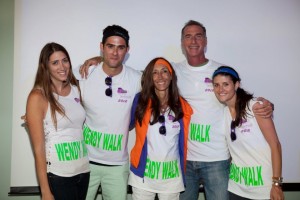 working in New York and Jackie was a senior in high school getting ready to go through college applications. The doctors had described Wendy as having a huge mass, but unbeknownst to the girls, that mass was an 8-pound tumor. After Wendy’s first surgery, the doctors believed they had gotten it all, and Ali resumed to work in New York while Jackie continued applying to colleges with her mom’s help.

In the fall of 2009, Jackie went off to Bucknell University to play volleyball, however after almost a year, Wendy was progressively getting worse, so she decided to join her family back home in Los Angeles. In November 2009, the doctors officially diagnosed Wendy Landes with Liposarcoma. Shortly after the diagnosis, Wendy’s tumors doubled in size, and with only one experimental drug on the market, she had no choice but to use it.

[quote]“We said, ‘we have to find something. How could there only be one thing?’ There was literally no information anywhere.” [/quote]

And that is when they found the Liddy Shriver Sarcoma Initiative, which then prompted the Landes siblings to come up with the concept of Wendy Walk. They discussed the idea with their mom who let them take the front seat on this project, and in February 2010, Wendy Walk was set for April 18 in 3 different but meaningful cities: Los Angeles, Miami and New York.

Their first year, about 200 people in each city showed up and showed their support. Admission was $25 and they served bagels to the participants following the walk. People began reaching out and asking how they could help with 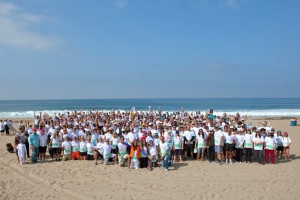 Wendy Walk the following year. Wendy had such an amazing and powerful experience with the walk that she wanted to be able to attend them all, so they staggered the dates, which would allow her to do so.

Jackie was recruited to the University of Miami for Volleyball and to study film, knowing very few people but determined to spread awareness about Wendy Walk. While Ali returned to New York, Jackie began the next chapter of her life in Miami, where she joined the Sigma Delta Tau sorority.

The outpour of love and support from the Greek community was unbelievable, she tells me. Wendy Walk caught on to the students at the university and people began seeing what a strong impact it really had.

Unfortunately, Wendy’s condition was getting worse, and in May 2012, Ali moved home to help take care of her mom. 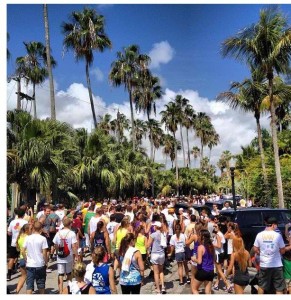 Their father, Robert Landes, retired in order to care for Wendy, and Ali spent her time working out, being spiritual and going through the emotional journey with her mom. Together, Wendy and Ali would speak to donors, make videos and put the story out there. Wendy Walk became a full-time job for Ali.

“I told my mom that I never thought I would find something that has made me feel the way I do about basketball. I never felt that way until Wendy Walk. I care so much about this and this is the same feeling – if not stronger – that I had for basketball,” Ali tells me.

Meanwhile, in Miami, Jackie went on to produce an award-winning web series at LA Web Fest and dipped her feet into all aspects of production from screenwriting, to art directing, to acting. She continued to go to school while her mom was going through her procedures, taking a lot of flights home when necessary. 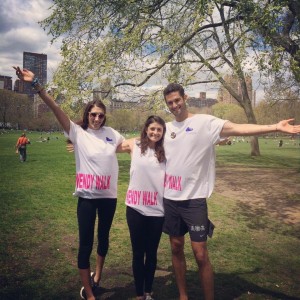 “My mom would have hated for our lives to stop, and for us to stop growing. She always said that suffering is optional,” Jackie tells me while explaining why she decided not to move back during this difficult time.

I am in awe of this family. Really and truly. Their desire to keep moving forward, to fight for a cure, to spread awareness about Liposarcoma, and their love and support for one another is inspiring and heartwarming. Throughout the interview, both Ali and Jackie would interject each other to give credit for how hard they work or how big of a help they were to their mom, and to be honest, I don’t see that type of genuine support that often. They acknowledge what each has brought to the table, they encourage each other to be the best version of themselves, and they never lose sight of their mission: to spread awareness and raise funds for Liposarcoma in honor of their amazing mother.

Jackie recalls her Wendy’s spirit and her determination to keep going.

[quote]“I know it might sound cheesy but, it’s like that song…if my mom had a choice to sit it out or dance, she would always, always dance.”[/quote]

In March 2013, Wendy Landes passed away after a 5-year battle with Liposarcoma. Jackie had flown home to join her family the week before spring break. The following Monday, Jackie went back to Miami and was greeted with an 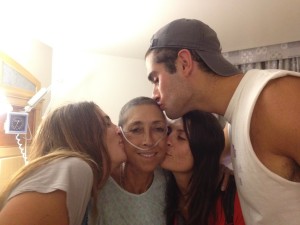 unimaginable amount of love from the University of Miami community. Ali continued to work on Wendy Walk, but in a new setting — United Talent Agency (UTA) is a sponsor and offered her a desk to work from. She stopped working out of her mom’s old office and moved over to UTA where she can share in the good energy, excitement and hard work. [highlight]Following their mother’s passing, 800 students showed up to the Wendy Walk in Miami while New York and Los Angeles were shown an immense amount of support as well.[/highlight]

As a team, the Landes family works diligently to put on Wendy Walk. To me, Ali and Jackie are such a force and I could not think of a better way to celebrate #MoraversaryWeek than by honoring these two phenomenal young women. Not only are they extremely hardworking, as they work with separate committees in each city to ensure their events are a success, but their hearts are pure and generous. Throughout our entire interview I felt like I was at a loss for words – it’s not everyday you come across a woman who inspires you and I happened to be in the presence of two incredible women who I wholeheartedly believe are changing the world one walk at a time. They credit the success of 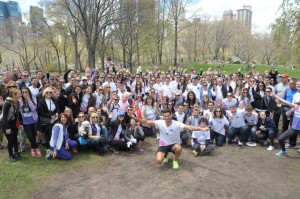 Wendy Walk to their amazing group of volunteers, their Director of Operations, and their family and friends for helping them every step of the way.

This past year was the first year that they added another official city to the Wendy Walk: Party City, Utah. The attendance was great, and they will continue to hold the fourth walk in Park City along with several smaller events in other cities.The last Wendy Walk held over 3,000 participants! Safe to say they’ve come along way since the first year.

What’s next on the agenda? Several spin events in cities such as Boston, D.C. and Los Angeles, Brunch at Brick and Mortar on December 6th where 10% of all proceeds go to Wendy Walk, and a cocktail party at Lavo in NYC on January 8th.

These women can really do it all: help the community and follow their passions. 6 years and Wendy Walk has made its mark and is helping us get one step closer to finding a cure. I know this is just the beginning for Ali and Jackie. I 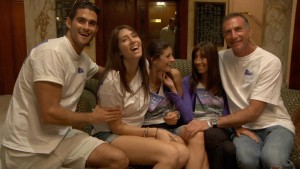 can’t wait to see the Wendy Walk spread to 50 cities, and I am excited to see what creative film project Jackie takes on (and succeeds at) next. They are the real deal. Not to mention that they are now some of my heroes.

I have to commend not only Ali and Jackie, but also their beautiful family, who are very grateful and are true pillars in the community.

Thank you Ali and Jackie for letting me into your world, for sharing your story with me, and for inspiring me beyond belief. Thank you for showing me how many wonderful people there are out in this world. And thank you for reminding me why I do this – because if we can just reach even one person – it’s all worth it.