Lady Antebellum serves up yet another great show, this time at the Air Canada Centre.  I gotta tell you, they are such a 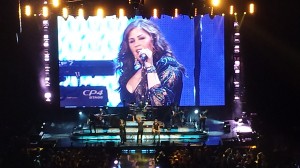 solid band.  If you are looking for quality music, talent and a great overall concert experience, they don’t disappoint.  This was my second time seeing them and even though I much rather see them at our outdoor venue in Toronto (the Molson Amphitheatre) it was still a fantastic show.

I have to say that the crowd for country music shows is by far the greatest group of people.  Add in the cowboy hats, boots and the whole plaid outfit and mix it in with their overly enthusiastic attitude, and you are bound to have a good time.  Some people were even more excited to see the opening acts.  No, I’m not kidding.  Kacey Musgraves and her lit up boots got the crowd singing along and Kip Moore had lots of people up and dancing. 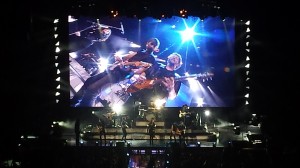 Once Lady A hit the stage, everyone was out of their seats.  Songs like Just a Kiss, Get to Me and American Honey were absolute crowd pleasers.  I definitely got goosebumps during those.  Though, the best moment by far was when they went completely acoustic.  They brought on an 8 year old girl to sing along with them – having the entire place saying a huge “aww” in unison.

The only downfall was the medley of slow songs they sang here meant they wouldn’t be performing the full versions later.  And, I was really looking forward to Goodbye Town and Wanted You More.  Those were the two songs I came for.  I get why they couldn’t sing many of their slow ones since it was a concert and you want to keep a momentum. 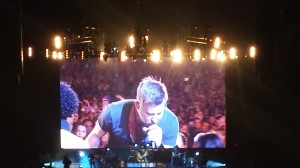 Overall, they were great and provided us with some laughs and a good solid two hour show.  Ending the show with an amazing encore, they sang their fan favorite I Need You Now and sang their own version of Avicii’s Wake Me Up – which had us all going crazy and pumped us up on adrenaline.

(Mona is a contributer for GiveMeMora.com based out of Canada. She loves all things entertainment related and is our go-to for concert reviews!)