I’ve been following Sara Bareilles since before she came out with her hit “Love Song” a few years ago, so obviously when the Artists Den invited me to a private concert featuring her I couldn’t say no! On October 25th I headed over to the Orpheum theatre in downtown LA with my plus 1 and got ready for one hell of a show. 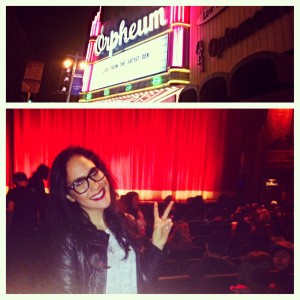 I mean, this girl can SING. Her radio hits don’t do her justice; you HAVE to see her live. She stood at her piano and sang her heart out over a recent break up and lezzz be honest ladies (& gents), we can all relate to heartbreak! Or at least I can. And her self-written songs spoke to my soul. Okay, that’s cheesy but it’s true!

Not only is my girl SB an amazing musician (besides writing her own songs & having a phenomenal voice, she also plays the piano and guitar), but she is HILARIOUS! She was cracking jokes left and right in between songs, throwing digs at her ex (we’ve all been there just maybe not in front of cameras and a huge audience), and she made us all feel like we were her BFF. She’s that down-to-earth girl from LA who is happy to be doing what she’s doing. She just casually happens to go on tour with Katy Perry and Teagan & Sara. No big deal or anything. 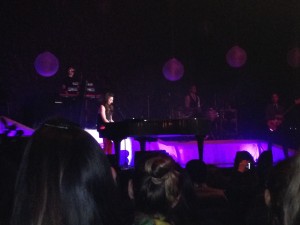 For almost 2 hours she played familiar songs like “Love Song” and several new ones from her recent album, “Brave”. Believe it or not, I don’t have one critique here. Seeing her live & watching her effortlessly put on a great performance made me an even bigger fan. I highly recommend seeing her if she comes into your city! Worth every penny.

Keep an eye out for the TV special of her concert set to air in the beginning of 2014. Thank you again to The Artist’s Den for letting me be a part of this!

How A Simple Webinar Could Save Your eLearning Business

On The Run with Bey and Jay