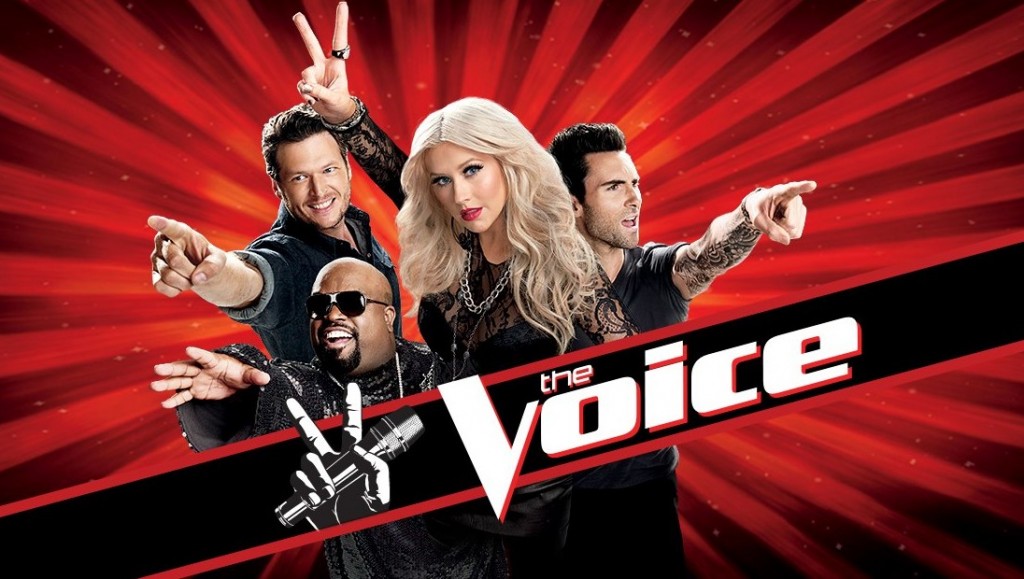 Ever wonder what it’s like to go to a taping of The Voice? Have you wondered how it would be if you were to be present for a live show and in the same room of four of the hottest musicians out there? Not to worry hunnies, I’m giving you a first look inside what it’s all really like behind-the-scenes at The Voice! 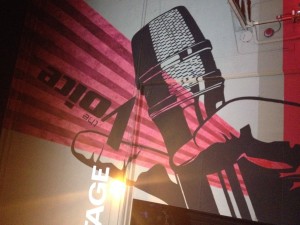 Here’s a play-by-play at a day in the life of a fan attending The Voice:

I attended The Voice taping as a fan today, starting my day off at getting to Universal Studios by 2pm to check-in and go through security. You’re not allowed to bring your phones or cameras — sue me, I snuck mine in. It’s not like I took any pictures during the show, but how was I supposed to get you guys some visuals without my phone?

Once you get through everything, there are food trucks (the food looked AMAZEBALLS but not healthy) and a tent where all the audience members are supposed to wait. Since I had time to kill, I headed upstairs to Starbucks, got a coffee, walked around and went back down to sit through 1iota’s “white tent talent show” where they select a few “singers” from the crowd to perform. The two MC’s for the talent show were hilarious and I thoroughly enjoyed them as well as the entire 1iota staff.

At around 4pm they loaded us into the shuttle and took us to sound stage 12, the largest sound stage on the lot, where the show is filmed. We lined up outside (in the freezing cold with no heaters) until it was time to finally go in. Note: bring a warm jacket because outside is just as cold as inside. There are NBC interviews going on by the sound stage — we saw James and Cole outside prepping and they were really sweet to the fans. 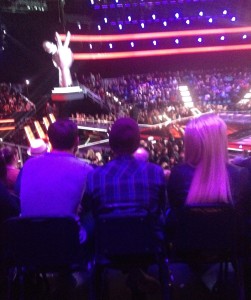 Upon entering you see a Starbucks bar but don’t get too excited it’s only there for talent and crew. Burn to my life. Once you actually go inside, the set up is really cool. It’s not as big as it looks, but the house was packed. The stage is bigger than it appears to be on our TV sets. I was seated to Adam Levine’s right. If that’s not fate, I don’t know what is. He is my one and only celebrity crush; I absolutely adore him and his dimples. Plus, I hear he likes to take girls to McDonald’s on their first date…how appropriate because I LOVE Mickey D’s! Match made in heaven, right?

They started prepping us for the pre-taped segment with last year’s winner, Danielle Bradbury. People were starting to get restless and bored, especially without their phones to keep them occupied. Cory, the hype-man, was giving out free stuff but that wasn’t enough to occupy the 18 year old guy one seat down from me who thought it was a good idea to stomp his feet like a 2 year old for over 30 minutes. And his sweet mom (no sarcasm here, she was a doll) didn’t have the balls to tell him to stop! But, since I’m trying to learn to censor myself these days, I bit my tongue and didn’t say a word.

Danielle finally performed and she was lovely. I liked her a lot last season and was happy to hear her sing for us. Finally at a few minutes before 5pm (remember, it’s live on eastern time so we had to start early), the judges came out. Christina looks smaller than ever, CeeLo was wearing one of his weird outfits, Blake in the usual same get-up and Adam looking suave as usual in a white jacket and skinny pants. As soon as they all took their seats, their glam squads invaded and began doing touchups. Blake is exactly as he seems on TV: kind, warm and humble. Adam was taking a few bites of food here and there until it was time to go live. Christina was covered by her glam team and CeeLo was just chillin’ while he was getting his bald head patted down by his make-up artist. 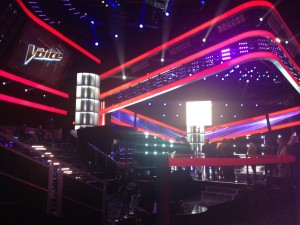 Once the show went live, it all went by really fast. The judges were super slow tonight in giving their feedback. In fact, many of the audience members thought Christina was high when she was commenting on Jacquie Lee. Having produced 2 and a half years of live television and having been a host on live TV for the past 3 years, I know the urgency that takes place and how important it is to get to the point. I have to admit, it was funny watching Carson squirm a bit. I couldn’t help but laugh. Maybe cause I knew how he was feeling in that moment. I also knew that backstage would be madness with producers screaming (later got confirmation that I was correct LOL). In the middle of the show, the mentors of NBC’s The Sing-Off did a little promo. Lucky for me, I was seated next to the sky box and got to see Jewel and Nick Lachey up close! Can we take a minute to comment on how Nick Lachey is a lot shorter than I thought? And Jewel looked really uncomfortable.

Overall, the show was great. Everyone was truly amazing and really gave it their all. I can’t believe it’s already the semi-finals! The two that blew me were Jacquie Lee (Team Xtina) and Tessanne Chin (Team Adam). They were unreal. My predictions for the final 3 are Jacquie, Tessanne & Cole. In between commercials I caught Christina throwing balls of paper at Blake while they played around. You could see they really are like brother and sister both on screen and off.

Afterwards, I stayed and got a full tour of what goes on behind-the-scenes. This

was my favorite part! I saw where the producers sit during the live show (the control room), I went into the producers tent, and even saw the famous make up tables we see on the show backstage. It all reminded me of my time in the TV studio where I spent endless nights slaving over my shows and making sure it all went perfect. I lived for those nights. And I live for being able to watch magic happen on my TV week after week. It truly is magical the way a live show is run. You would never guess the chaos that goes on to ensure there are no mishaps. My experience ended with watching Christina do some post-show video and a little bump-in with Adam Levine. That was the cherry on the cake — literally bumping into him while he’s going off about something. After Adam left the stage I went to sit in his chair for a picture only for security to not let me because Christina was sill filming. Oh well, it was still perfect.

Well, there you have it people: a look inside what it’s like to be at The Voice. Thank you 1iota and to The Voice for showing me around! You all were so amazing to me and I hope to be back to cover another episode soon! xo NM

Dating Without The Label