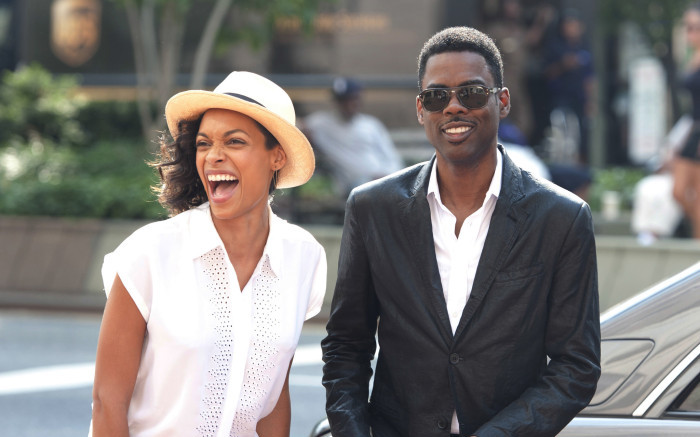 Last night I went to see Chris Rock’s new film Top Five and holy hell, it was SO good! 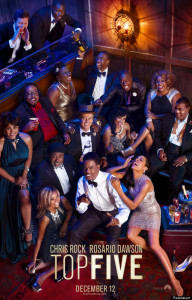 Not only was the film well cast (Kevin Hart, Gabrielle Union, Rosario Dawson and Cedric The Entertainer are all in the film as well as cameos by Adam Sandler and Whoopi Goldberg), but it was hilarious in a real-not-forced type of way.

This role, which shows that Chris Rock can both serious and funny, was exactly what Rock needed to catapult him into a new field of acting roles in the coming years. I have been waiting to see him take on softer roles and he finally has! [typography font=”Cantarell” size=”15″ size_format=”px” color=”#ff6666″]Top Five has proven Chris Rock is in fact a movie star, and will only continue to grow within the industry.[/typography]  This was his breakthrough role into better things. I can guarantee it.

Seeing Rosario Dawson in this film was also extremely refreshing. I’ve been a fan since I saw her lead in Rent, and 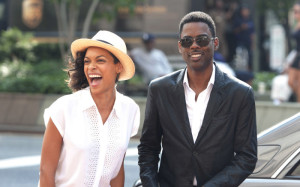 she’s stepped up time after time with each role given to her. Dawson plays a reporter profiling Rock’s character, Andre Allen. I love how real she is on-screen, and there’s no denying she has an instant chemistry with the camera.

I highly recommend Top Five. Not to mention, Jay-z and Kanye West executive produced the movie! So yes, the soundtrack is pretty amazing.

And on that note, here are my top 5+1 favorite artists (watch the movie and you’ll understand):

That was hard! Couldn’t decide between Lana, Ariana Grande, Big Sean, and Jessie J for my 6th! But Lana won. Sorry.

Business Etiquette: How To Stand Out At Your Job

Being Angry With God

Why Beyonce Continues To Get It Right